GUEST POST: Which women are visible in the Scottish Parliament? 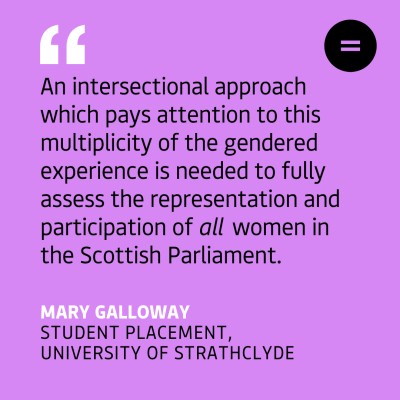 Today we're publishing the next blog in a series from the current student placements Engender is hosting from the University of Strathclyde Applied Gender Studies and Research Methods course.

Following the local elections last week, it is clear that diverse representation is needed at all levels. Mary Galloway's research focuses on representation in the Scottish Parliament, and for her first post Mary maps out her research into the visibility of women with multiple marginalised identities, as well as discussing gender audits, and why an intersectional approach is needed in order to fully assess the representation and participation of all women in the Scottish Parliament. You can read Mary's second post here and third post here.

In February 2022, it was announced that the Scottish Parliament will undergo a gender audit, something for which Engender, along with other organisations and campaigns, has long advocated. This audit will assess the extent to which women participate in and are represented by the Scottish Parliament, following the guide created by the Inter-Parliamentary Union. While a great start towards a gender-sensitive Parliament, there are clear limitations in what an audit can do to bring an intersectional lens to women’s representation. It is crucial that to truly explore gender equality, we need to uncover the experiences and positions of all women in Holyrood, including those of the most marginalised. The project I am carrying out here aims to provide a snapshot of the representation of the women in Scotland whose lives are structured and limited not just by their gender but by their race, physical and mental abilities, and sexuality too.

Intersectionality is a concept brought forth primarily by Black feminists. It seeks to illuminate the way in which marginalised communities may have their experiences shaped by numerous structures of oppression simultaneously. For example, gendered oppression cannot wholly account for the discrimination faced by a disabled Black woman. Instead, her experience is shaped by racism, sexism and ableism all at once. What this research project seeks to highlight then, is that women with multiple protected characteristics have needs and concerns that are specific to their identity. An intersectional approach which pays attention to this multiplicity of the gendered experience is needed to fully assess the representation and participation of all women in the Scottish Parliament. The gender audit of the Scottish Parliament should proceed with an understanding and utilisation of intersectionality as far as it can within the limitations of auditing an overwhelmingly male, white institution.

Over the course of three blogs, I will delineate the findings of my research into the representation of women in the Scottish Parliament using an intersectional lens to exemplify the value of such an approach. This research has involved using the Scottish Parliament’s website and search tools, looking specifically at the Official Report, Written questions and answers, and Motions in Session 5 (May 2016 - May 2021). These search tools have enabled me to gather data, firstly on how often discussions about women with multiple protected characteristics were being had, secondly on who in Parliament was initiating these conversations, and thirdly on the substantive content of these discussions.

How often are marginalised women talked about?

The frequency of discussions about marginalised women separately from the broad category of ‘women’ provides a good indication of their visibility in the Scottish Parliament. It was found that, in all three areas of parliamentary business, the Official Report, Motions and Written questions and answers (WQAs), mentions of women with multiple protected characteristics were uncommon. Firstly, in the Official Report, search terms that listed a protected group alongside women, such as ‘disabled women’, yielded only 46 relevant results in total. To contextualise this, Session 5 was five years long and had 438 Meetings of the Parliament and 2204 committee meetings. Search terms that included women alongside another protected characteristic brought up only 51 motions out of 2717 (1.9%) in total and only 33 written questions and answers out of 33,334 questions (0.01%) in total. In relative terms, therefore, discussions of women that can be said to have had an intersectional approach in the Scottish Parliament were extremely rare. The presence of some references to women facing multiple discriminations indicates that there is an awareness of their need for focused attention separate from that of women in general. The concerns of multiply marginalised women are evidently being brought to the attention of people in parliament then; however, this has yet to translate into representation proportionate to their vulnerability.

Clearly, women facing multiple discriminations need greater representation in the Scottish Parliament; however, it is useful to look at where they are being discussed at present, who is initiating the conversations and what they are saying. The next blog in this series will do the former, uncovering whose participation in the Scottish Parliament is resulting in the discussion of marginalised women separately from women generally. The third blog will take a focused look at Black and minority ethnic women in order to exemplify the extent to which the specific needs of a community of vulnerable women are understood and represented by the Scottish Parliament.