Why we need data to achieve equal representation in politics 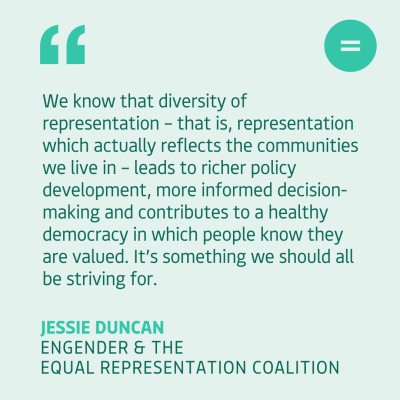 Today we’re publishing the last in a recent series of blogs from the Equal Representation Coalition looking at the state of equality in our politics at the moment, discussing their work in tackling barriers to participation, and exploring the crucial role that accurate data plays in achieving equal representation in our councils and parliaments and why we need more of it.

Here, Engender’s Equal Representation Development Officer Jessie Duncan has a round-up of what key issues we’ve covered in the series and why gathering data is vital to achieving equal representation.

In the run-up to the local elections taking place today, we’ve been publishing blogs from members of the Equal Representation Coalition, which Engender is part of and which brings together organisations from across the equalities sector in Scotland with shared goals around improving access to politics for people from underrepresented groups in order to achieve equal representation in our councils and parliaments They’ve been writing about the pressing need for more diversity within our councils and beyond; their work tackling barriers to participation in politics; and the importance of transparency in representation in order to understand whose voices are being heard – and crucially, whose aren’t.

We know that diversity of representation – that is, representation which actually reflects the communities we live in – leads to richer policy development, more informed decision-making and contributes to a healthy democracy in which people know they are valued. It’s something we should all be striving for.

However, this version of representative democracy is far from our current reality, particularly when it comes to councils.

In the first blog of the series, I discussed that based on the limited information we have (gathered through anecdotal methods and assumptions which cannot be considered robust or acceptable given the importance of the information), we know women currently number only 29% of councillors, and ethnic minority councillors make up less than 1.5% of the cohort nationally. When it comes to the numbers of councillors who are LGBTI+ or disabled, we don’t have access to reliable data to understand what representation looks like. You can read the blog online here.

Essentially, we know when it comes to representation, we have problems. We just don’t know exactly the extent or shape. Despite voluntary commitments from parties to audit the diversity of candidates and elected representatives and the existence of a legislative basis to require it, very limited data is available publicly. This is a problem because as individual organisations working to reduce barriers to participation (and the same is true for parties, councils and government, too), we don’t have data which would allow us to home in on specific areas of underrepresentation affecting particular groups, particular geographies, particular parties or particular stages of the political journey. It also leaves us no benchmark to recognise progress (or regression) or to identify approaches that work.

The blog also flagged the voluntary Candidate Diversity Survey being run by Scottish Government this year for the first time, and explained why this is a welcome development but what we really need is a comprehensive, enforceable system for gathering data at all elections in Scotland.

Elena Soper and Rhianna Mallia at YWCA Scotland then took the reins to tell us about their work supporting girls and young women to develop skills and become leaders in their communities through their Young Women Lead programme - ultimately increasing young women’s representation wherever decisions are made, including within formal politics.

They told us that based on their research, 75% of young women who consider themselves ‘politically engaged’ would rule out standing for office. This means that many young women who are interested and active in politics don’t see a place for themselves, citing toxic working environments and institutions not set up to accommodate the needs of people like them. They then drew attention to ‘the indisputable fact’ that the needs and experiences of women are routinely not considered in all kinds of crucial decision making, from product development to legislation to designing public spaces. YWCA are working to highlight the fundamental role that collecting gender-disaggregated data can play in creating a world which works better for women – including when it comes to who our elected representatives are – so that the most impactful solutions to underrepresentation can be formulated. You can read the blog online here.

The importance of ethnic minority representation

Next, we heard from Junaid Ashraf at CEMVO who examined the underrepresentation of ethnic minority communities in councils – which, as shown above, is shockingly low – as well as the specific barriers to participation that exist for ethnic minority activists and candidates as they become involved in politics against ‘a long history of exclusion from public life’. He wrote about the internal bias within the public perception of what a politician is – and the outdated image of councillors as ‘white, wealthy, older men’ shapes much of how these institutions operate. Another crucial barrier identified is the increased risk of abuse for those from ethnic minority communities with prominent political profiles. We also heard how the resultant lack of diversity hampers local authorities’ ability to engage effectively on all kinds of issues.

Junaid also highlighted the role that political parties play in shaping who is represented on the final ballot paper and noted the need for them to publish diversity data on prospective candidates and councillors so that we have a fuller picture of the factors shaping representation. You can read the blog online here.

Our final contributors were Hannah Stevens and Rosie Trevill at Elect Her. They told us about their work to support and equip women to stand for elected office - including many council candidates across Scotland - through workshops, peer support and resources.

Getting more women into councils is a long-term project without any easy fixes. Through their work, Elect Her know that there is ‘no shortage of women who care about their communities in Scotland, but we can see they’re not all being represented’. Once again, we see this interest and engagement not translating into more councillors.

To understand better why this is and where efforts need to be directed, Hannah and Rosie called for more reliable and consistent data about ‘who is stepping forward as a candidate, not just those elected, so that we can identify – more importantly – who isn’t coming forward’. You can read the blog online here.

So, where does this leave us?

Thinking about today’s election, while we are, of course, hopeful of increased diversity within Scotland’s councillor group, but based on what we know about the candidates already, we recognise that the kind of transformational shift we need is extremely unlikely.

These blogs have provided a snapshot of the challenges we face in getting there and are just part of the story.

Many of our Coalition partners have written and discussed this subject in more detail, including givingevidence to the Scottish Parliament on tackling barriers to participation in local politics (read Engender’s response here).

However, in order to provide a baseline against which to measure progress, we need an accurate understanding of who our current representatives are. That’s why we’re calling on all decision-makers – from parties to government – to ensure that this election really is a turning point in how we gather crucial equalities monitoring data on our representatives.