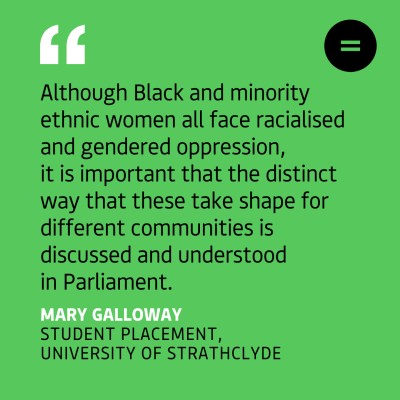 Today we're publishing the next blog in a series from the current student placements Engender is hosting from the University of Strathclyde Applied Gender Studies and Research Methods course.

Mary Galloway concludes her blog series in this third post, which focuses more deeply on the discussions of Black and minority ethnic women in the Scottish Parliament, and the importance of Parliament understanding the distinct ways that racialised and gendered oppression take shape for different communities. You can read Mary's first post here and second post here.

In this final blog, I will carry out a more focused analysis of the results produced by my research into the representation of women facing multiple discriminations in the Scottish Parliament. I have so far talked about 'women with multiple protected characteristics' quite abstractly. It is important to think about who these women actually are and why it matters that the multiplicity of their marginalisation is acknowledged. Black and minority ethnic (BME) women face both gendered and racial oppression, providing them with experiences that are distinct from white women and Black men. For example, Black and minority ethnic women were some of the worst affected by the COVID-19 pandemic. For this reason, it is crucial that the Scottish Parliament is attentive to the specific needs of this group.

In my search of the content of Scottish Parliamentary business during its 5th session, I used search terms of 'Black women', 'Asian women', 'women of colour', 'BME women' and 'Black and minority ethnic women'. The search term that produced the majority of results for this category of women was the latter term of Black and minority ethnic women. Though this term is importantly inclusive of the diverse ethnicities of women in Scotland, its domination in the results also displays a degree of homogenisation. The needs of Asian women and Black women are not necessarily symmetrical; for example, forced marriage and 'honour’-based violence are forms of abuse that particularly affect Asian women. Consequently, although Black and minority ethnic women all face racialised and gendered oppression, it is important that the distinct way that these take shape for different communities is discussed and understood in Parliament.

A number of BME women's issues were covered in the various areas of parliamentary business. For example, there was recognition of the disproportionate impacts of COVID-19 on Black and minority ethnic women and the prevalence of workplace harassment and discrimination against them. Upon comparing the content of the remarks made by MSPs versus witnesses in the Official Report, there was a notable difference. Witnesses' mentions of Black and minority ethnic women tended to be highly detailed and substantive, whereas MSPs' references tended to go no further than a nod to the difficulty of BME women's lives and calls for more diverse representation generally. MSPs' discussions of BME women were largely quite shallow despite the richness of witnesses' evidence. Furthermore, often when BME women were mentioned by MSPs, they were listed alongside a number of other marginalised women. For example, in a Meeting of the Parliament on International Women's Day 2020, Alison Johnstone of the Scottish Greens said that Parliament should tackle the harassment of women of colour, LBT (lesbian, bisexual, transgender) women, disabled women and refugee women in the workplace. Although this is a very important problem facing women with multiple protected characteristics worthy of discussion, it does not pay attention to the specific discrimination of BME women that is both racialised and gendered. This illustrates a lack of engagement with the fundamental notion that underpins intersectionality, whereupon the needs of communities with multiple protected characteristics are specific and in need of concentrated attention. It is consequently important for MSPs to make the most of the information provided to them by witnesses and their constituents about the reality of BME women's lives in order to affect change in their favour.

This focused look at the case of BME women has provided an insight into the details behind the numbers provided in previous blogs. Such an examination is vital as it uncovers not just how often women with multiple protected characteristics are being mentioned but what is actually being said in these instances. The discussion of Black and minority ethnic women must not be a tick-box exercise, and neither should the discussion of any women facing multiple discriminations.