F-words: Writing ourselves into existence

Raman Mundair is an Indian born, Queer, British Asian writer, artist, photographer and film maker. In this contribution to our F-words series, Raman explores the power that words can have in giving voice to experiences and identities so often ignored. 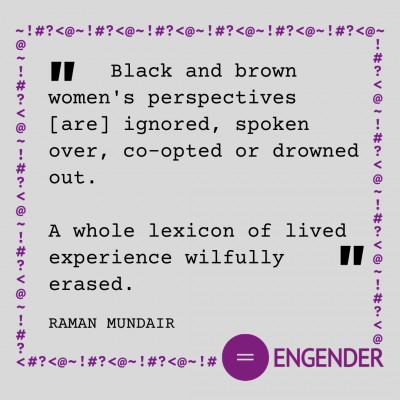 I recently read an article by Professor Lena Karlsson - 'Towards a language of sexual gray zones: feminist collective knowledge building through autobiographical multimedia storytelling' - which led me to consider that beyond the infinite shades of grey lies a rainbow of Black and brown women's stories that never get to breathe and take up space, not even in the constant hum of social media. These are doubly marginalised voices from within the grey spaces women can inhabit or are pushed into - Black and brown women's perspectives which are ignored, spoken over, co-opted or drowned out. A whole lexicon of lived experience wilfully erased.

From the age of eleven, I was frequently related to by adults as an adult. They saw me, a brown girl, as being closer to a young adult in my twenties, than my actual age as a young teen. This wasn't just about my supposed emotional maturity, but about the way I was seen as somehow 'knowing' and 'wise beyond my years'.

I had confusing feelings regarding this. I felt a strange, misplaced, sense of pride – that I was somehow 'special' and different and 'not a child'. At the same time I felt an unusual fear. One that I wasn't able to name until firmly into adulthood – that I was scared that I was being exposed and made vulnerable. That I was being toyed with under the guise of compliments.

It happened many times. A stand out moment included a white middle class heterosexual couple I met at the school gates in my multicultural town. I would collect my siblings when my mother couldn't and they happened to be close friends with their children. Playdates were arranged at their huge home, a house with a playroom, sprawling garden, basement and attic for just four people. Fresh bread and pies were produced from their Aga. I was offered wine and olives. I was invited to linger. I was a working-class kid with a full-on home life and too many burdens on my shoulders for my tender age. I was desperate for refuge. For a safe place to spend time and just be.

I felt lucky that they liked me. That they invited me into their rich, cultured castle, lined with vinyl, books and actual art on the walls. I felt special being asked for my opinion, for being drawn into their warm conversation. When he said, “Asian girls always look so inviting, with their bright colours and make up,” I smiled uneasily. When she added “Like exotic birds,” I looked to the ground. “The black kohl around your eyes,” he continued, moving closer to me, “draws out your flirtation.” “Hmmm, yes,” she said and offered me more wine.

I had no language to call out the grey murk that I was manoeuvred into. It took me many years to realise what happened. That I was in fact groomed. It took many years to find the words to tell the story and the language to speak my experience. I parcelled it away and reduced the memory in my own mind. I gaslit myself and allowed others to gaslight me too. It's hard to write this knowing that it wasn't a solitary experience and that it is in fact the norm for Black and brown girls. Our bodies are hypersexualised by our own communities and then again by white communities who racialise and other our bodies.

In an article for The Guardian newspaper Charlie Brinkhurst-Cuff writes of young Black British girls being given messages by parents and elders to “watch what you wear, because you’re over-sexualised [by adults].” A similar messaging is active in South Asian culture whereby a girl-child is burdened with the responsibility of policing herself and other girls, keeping them in check, shaming and reporting them when they deviate from acceptable norms. At the same time as being closely watched and judged by her own immediate elders and families.

It was made known to me that if I drew unwanted attention that was my own fault and in fact I was actively harming my own family, culture and society. The gaze, the actions and the abuse of those who sexualised me were left unmentioned and there were no words or language with which to hold or convey this experience in my mother tongue, English, Scots or otherwise. What was clear in every language, was that whatever happened was my responsibility. That my lived experiences, along with other brown and Black women and girls, were suppressed on multiple levels, including by the language of white feminism. A space that claimed to make space for me but failed to acknowledge the very real intersectional dynamics at play. 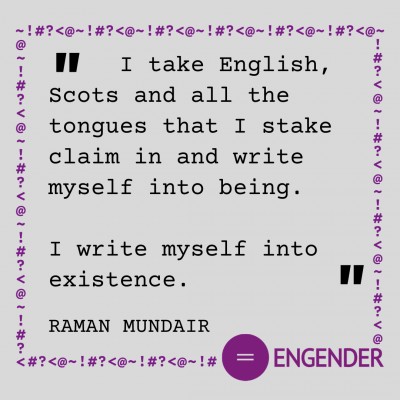 As a child, as a young person and for most of my adult life, I could not make sense of my lived experience because I did not have a language that was fit for purpose and that could hold the intersectional nuances of my experience. I have been raised to believe that I am responsible for the behaviour of others toward me and I have been denied the kind of knowledge that I would have needed to recognise dangerous situations and denied the possibility of shifting the blame or responsibility onto another person where it rightfully belonged.

Discovering the work and words of women of colour feminists and Black feminists offered me a lens through which to disrupt what Claudia Garcia-Rojas refers to as “dominant dialogues”, and to frame my experience on my terms and within my cultural contexts. Exposure to this radical body of wonderful women's words gave me the possibility to imagine myself as the author and narrator of my own experience. That I could be my own God/dess and create and affirm my own existence – through my art, through my way with words. That I take English, Scots and all the tongues that I stake claim in and write myself into being. I write myself into existence. I write myself from the periphery into the centre where I have as much right to claim space as anyone else.

F-words is a blog series exploring feminist language, from specific terminology to general reflections. Read all the entries here.