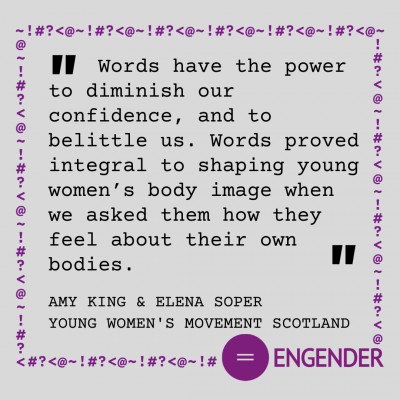 The YWCA Scotland - The Young Women's Movement are currently running a digital campaign which aims to open conversations about young women's body image and explores new ways of looking at, thinking about and talking about our bodies. We asked their Programmes Coordinator Elena Soper and Digital Officer Amy King to blog for us on the links between language and bodies. Check out #EatYourWords here and follow the YWCA Scotland Young Women's Movement on Twitter and Instagram.

When you heard at school that “sticks and stones may break my bones, but words will never hurt me”, they were wrong. We don’t even need to recognise an exchange as traumatic at the time for it to have an impact – many we don’t consciously remember are still with us, and they shape how we view ourselves.

Words bolster our actions, thoughts and feelings. Words have the power to diminish our confidence, and to belittle us. Words proved integral to shaping young women’s body image when we asked them how they feel about their own bodies.

From the mouths of young women

We published our fourth Status of Young Women in Scotland (SYWS19) report in May this year. Inspired by our Young Women Lead participants’ 2019 report on barriers to young women’s participation in sport and physical activity, we focused our attention for SYWS on body image. Teaming up with social research agency The Lines Between, we carried out surveys, focus groups and video interviews with young women and girls aged 16-30, in an attempt to better understand their own interpretation and ideas about body image. The results were far from flattering. 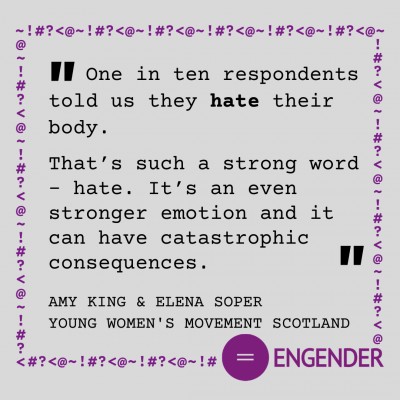 1 in 10 respondents told us they hate their body.

That’s such a strong word – hate. It’s an even stronger emotion and it can have catastrophic consequences, which we saw in this next result:

80% of young women who responded to the survey felt that their body image had stopped them from doing something or negatively impacted their confidence and limited their life choices.

Where does this negativity come from? Where are young women learning their body is somehow a barrier to their success, or just living confidently?

In too many cases, the culprit is the language of others.

A stand-out problem we recognised from the responses in our data collection through focus groups was the influence other people had on the young women’s body image. The words of family and friends, in particular, hold a lot of currency in young women’s perceptions of themselves. While many research respondents noted that their parents or partners were nothing but supportive, that wasn’t always the case. Thoughtless and intentional body negativity was noted as having long-lasting effects on young women.

I think my dad didn’t realise I was there and he was talking to my granny, and he was like ‘aw the wee one thinks she’s fat but we just tell her its puppy fat’. It just sticks in my head so much and at that moment me being like ‘I am fat!’ cause I’ve just heard my Dad say it, he thinks I’m fat, like… yeah just like a memory that lives with you for all of time. When I was 10 I went on my first diet.

It’s my mum that makes me feel so bad about my body. She doesn’t realise she’s doing it but... you know she’s meant to be the one that says that I look beautiful no matter what I wear… but she isn’t.

We have these group chats at school, I’m in one that has like hundreds of people in it, and every year people’s prom pictures get posted on it. Every single group chat I was in was talking about who looked good, who looked bad, who had a terrible dress on, who’s make-up was a state. We all do it, it’s just the norm.

It’s clear that the way we perceive and discuss our own and other people’s bodies is impacting us all. Comments often hold an implicit or explicit second meaning, which we pick up on and internalise. This biased language is shaping our body image – often without us realising that’s what is happening.

People saying ‘wow you look amazing’ after you’ve lost weight feels good for a second, but then it makes you think, what did they think about me before?”

It’s not just our family, friends and role models whose language impacts our body image though. Health professionals are also a source of fatphobic or body negative rhetoric for young women in Scotland.

We need to be so careful with obesity messaging from healthcare professionals and campaigns from the NHS. Dealing with the genuine public health crisis by treating fat people as idiots and slobs and continually challenging their access to healthcare makes it harder for them to love their body and can contribute to poor mental health.

The media also holds a lot of influence in our perceptions of beauty, acceptability and what should or shouldn’t be considered a “good” body. These ideals are repeatedly ableist, racist and transphobic.

I think it is important to emphasise that what we see in media really tells us quite clearly that our features are only ‘beautiful’ or even ‘acceptable’ on white, lighter, racially ambiguous women.

Our goal isn’t just to highlight these problems and negative influences on young women’s body image, but to work on creative solutions. We realised that the best way to begin tackling young women’s collective negative body image was to start an open conversation that challenged and inspired them to think differently; and so #EatYourWords was born.

More than a just pithy hashtag, #EatYourWords was created in an attempt to raise widespread awareness and collective change in women’s body image narratives and relationships across Scotland.

It’s all well and good us telling young women to feel better about themselves, but that doesn’t get to the root of the issue. We wanted to platform the experiences and opinions of a variety of women. We recognised the power of open discussion, inviting proposals for creative digital outputs that tied in with our research findings and goal of bringing awareness to the language we use to talk about our own bodies and the bodies of other people.

Allowing women to see their bodies as instruments which are capable of different things and not just objects which look pretty. There needs to be less of an association with how women look and the perception of how capable they are. It should not be viewed as unprofessional to not wear make-up or high heels. There should be more celebration of the wonderful things women's bodies can do other than "look nice”.

How we talk about ourselves massively impacts our own wellbeing and body image, but it has a ripple effect too. Everyone’s relationship with their body is unique and so personal, but there are shared experiences we can likely all relate to. To change the rest of society, we must begin by changing our own behaviours. We’re all guilty of being far more critical of ourselves than we would let our friends or family be. We need to speak about ourselves with the kindness we think others deserve.

Honest communication & open discussions about body positivity whether that is done formally or informally in different environments. Beginning this conversation in high school would have benefited me because high school is when insecurities and comparisons about body image starts.

All quotes from this article were taken from transcriptions of our interviews with young women for the SYWS19 Body Image report. They’re powerful – and that’s entirely the point. Words have power, they influence others and, in too many cases, they inflict (often unintentional) harm. #EatYourWords, and our values more generally, aims to rebalance the scales in young women’s favour when it comes to the societal weight put on their external image, particularly their bodies.

We have seen young women create Diet Culture Jars to replace the family swear jar, offer piercing dissections of the media’s morbid fascination with celebrities’ bodies, produce stunning artwork celebrating the diversity of young women’s bodies, and there’s more to come. The shift is already happening – these young women are leading the way to flipping the script on body image for generations to come and we’re excited to see where they take their narrative next.