F-words: the language of abortion

Dr Carrie Purcell is a Research Fellow in the Complexity in Health Improvement Programme, at the MRC/CSO Social and Public Health Sciences Unit at the University of Glasgow. Carrie also leads the Sexuality and Abortion Stigma Study (SASS).

As a sociologist, and a researcher who works on abortion, I spend a lot of time thinking about the language that’s used around abortion in everyday, medical, academic, media and advocacy contexts. This blog presents some of my reflections on that language.

Abortion: what do we call it and why does that matter?

Just using the word ‘abortion’ begs the question of what that term actually means in 2020. Long in common usage to describe the intentional ending of a pregnancy, ‘abortion’ is heavily loaded and associated with negativity, stigma, and misunderstanding.

Most abortions in Scotland now involve use of two medications which effectively cause a miscarriage. Early in pregnancy, this will likely involve cramping, heavy bleeding, which can be managed with menstrual pads and/or on the toilet. If later, it involves what health professionals often describe as a ‘mini labour’. Surgical abortions are less common but may involve, in early pregnancy, vacuum extraction of pregnancy tissue; or, later in pregnancy, surgery under general anaesthetic. For the latter procedure, women from Scotland still usually have to travel to England, despite evidence that treatment close to home is preferable. 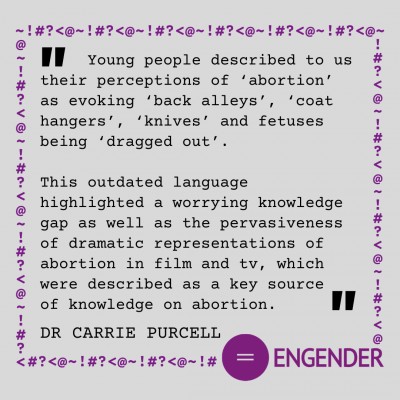 Abortion pills have been the most common method in Scotland for years. Nevertheless, in a 2015 study I worked on with colleagues at the University of Edinburgh, young people described to us their perceptions of ‘abortion’ as evoking ‘back alleys’, ‘coat hangers’, ‘knives’ and fetuses being ‘dragged out’. This outdated language highlighted a worrying knowledge gap as well as the pervasiveness of dramatic representations of abortion in film and tv, which were described as a key source of knowledge on abortion.

There is also the question of whether that term ‘abortion’ should be used at all. If you attend an NHS clinic in Scotland, abortion tends to be labelled ‘termination of pregnancy’. In part the use of ‘termination’ relates to drawing a distinction in medical terms with ‘spontaneous abortion’ (what most people call miscarriage).

In the context of fetal anomaly, the alternative ‘termination’ framing may be helpful. Someone ending a pregnancy because of a difficult prenatal diagnosis may not see themselves as having an ‘abortion’, because they understand abortion to be something which is chosen, or which happens in unplanned or unwanted pregnancies. This highlights broad assumptions about what abortion is and who has them. When dealing directly with people who have undergone abortion for whatever reason, it is important to be guided by the language they are comfortable with. At the same time, it is worth acknowledging that we often mirror the language we hear from health professionals. So there is something of a cycle in which the term abortion is viewed as stigmatising and so avoided, but the avoidance then contributes to perpetuating that stigma. If ‘abortion’ wasn’t so loaded in the first place – and misunderstandings about who has it and why so rife – those undergoing it in the case of fetal anomaly may not find it an inappropriate label for their experience.

Language used by people who have had abortions

In the Sexuality and Abortion Stigma Study (SASS), we’ve looked at some of the ways that women talk about their experiences of abortion, including things they seem to find easier or harder to say about it. While recognising that it isn’t a positive experience for everyone, we have explored ways that negativity around abortion is challenged through more positive ways of talking about it. We’ve argued that drawing out (explicitly or more subtly) positive threads in how people talk about abortion might help shift the conversation on from a focus on stigma and negativity, to how we normalise it and support people to frame it in a way that reflects their experience.

We found that explicitly positive ways of talking about abortion were much less common than negative framings, but did exist, for example in the ways participants talked about feeling ‘so happy’ to have the ‘fantastic’ option to end a pregnancy they felt unable to continue, or how ‘great’ it felt to know they were no longer pregnant. When describing how they felt about their experiences, we noticed that women often seemed more likely to talk about abortion in terms of what they did not feel, rather than what they did feel about it. For example, they might say ‘I didn’t feel ashamed’, ‘I wasn’t embarrassed’, ‘there hasn’t been a “what if?”’, or ‘I didn’t feel judged’. This highlights some of the emotions that social norms might lead someone seeking abortion to expect to feel – shame, embarrassment, regret, judgement. It also highlights a gap in language that women feel able to use when talking about abortion. Thinking about their experiences (and being asked to talk to a researcher about them), they spoke not of pride in their decision, but an absence of shame, not of confidence but a lack of embarrassment. They didn’t feel what they expected they might (or that society might expect them to), but they didn’t feel able to say they felt the opposite, either.

My body, my choice?

While the framing of abortion as a matter of choice remains common, one problem with this is that the flip side of choice is responsibility. So, if you make the individual choice to have an abortion, you bear the responsibility of everything that goes with it. Another problem with a ‘choice’ framing is that, for many, the decision to end a pregnancy is determined not by freedom of choice so much as circumstances (a poor relationship, existing caring responsibilities, economic instability) which determine whether they feel able to bear a child. Interestingly, in the SASS study, we found that women did not tend to draw much on the language of ‘choice’. This suggests that, while the abortion as a choice might be a significant principle, it is not necessarily what resonates at the level of individual experiences.

Getting the language right 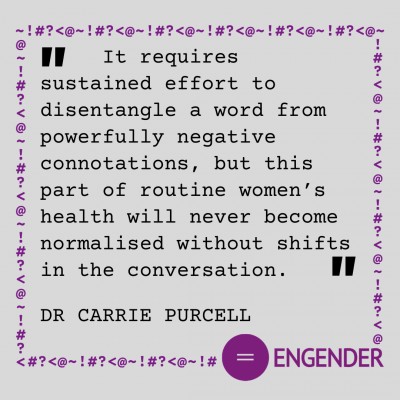 While what I’ve written above critiques some abortion-related language, I am conscious that I have at times used the term ‘women’. This is in part because all the participants in studies I have conducted in Scotland to date have been cis women. On reflection, the use of ‘women’ in study recruitment materials may have excluded non-binary people or trans men from volunteering, and this is a consideration that I’m taking forward in future research. In the same way that not all pregnant people are ‘mothers’ (some might be, some not), not all pregnant people identify as women (some may, some not). Issues of inclusivity, and the problems with ‘choice’, are why it is more helpful (as many advocates and researchers have been for some time) to think of abortion in terms of SisterSong’s concept of reproductive justice, that is, as ‘the human right to maintain personal bodily autonomy, have children, not have children, and parent the children we have in safe and sustainable communities’.

For me, the take-home when thinking about language and abortion, is the need to recognise a diversity of experiences and a range of possibilities in how we talk about abortion. It requires sustained effort to disentangle a word from powerfully negative connotations, but this part of routine women’s health will never become normalised without shifts in the conversation.