With the upcoming Scottish parliament elections Carla McCormack, from The Poverty Alliance, examines what devolution for Scotland could mean in terms of improved social security. 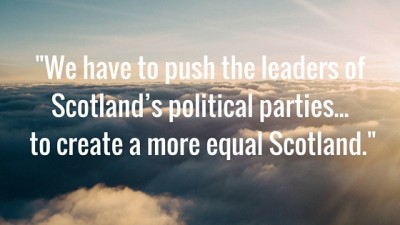 While every new parliament and government presents us with new opportunities, new powers over welfare and taxation being devolved to Scotland mean that this election is perhaps the most interesting Scottish Parliament election yet. The new powers provide us with an opportunity to think not only about the type of Scotland we want to live in, but also how we achieve this.

While the package of powers coming to Scotland may not be as extensive, or as cohesive, as many of us would have liked they are still significant, and they must be used. As an organisation primarily interested in tackling poverty, the Poverty Alliance is principally concerned about how we use these new powers, alongside existing powers, to create a more socially just Scotland.

Tackling poverty will not be easy and ultimately it will be expensive, but it is about choices and political will. We have to push the leaders of Scotland’s political parties to make the difficult but bold decisions necessary to create a more equal Scotland. This means being radical, and using our tax raising powers to fund the social security system we need to lift people out of poverty.

We recently asked our members what they would like to see done to tackle poverty in Scotland, and held an event specifically on the gendered nature of poverty, and many of the keys asks were around social security.

Participants thought that the next Scottish Government must raise benefit levels so that they no longer trapped people in poverty who were not in paid employment. Disability benefits were seen as being too low, and it was also agreed that these should not be means tested. It was thought that carers were undervalued by society as a result of this often being seen as something intrinsic in women’s DNA, and as part of valuing carers better there was a need to raise Carers Allowance. There was also support for the idea of topping up child benefit levels to reduce child poverty, and it was thought that this would be particularly helpful for lone parents – over 90 per cent of whom are women. The Poverty Alliance would also like to see benefits for working age adults topped up, as the value of these has been eroded following years of welfare reform. Our social security system is supposed to be a safety net for all but the current system does not reflect that.

In recent weeks Scottish Local Authorities have been making tough budget cuts, many of which will adversely affect people experiencing poverty. To avoid this happening again in the future, Poverty Alliance members supported the introduction of a socio-economic impact duty, and this will be a key ask from the Poverty Alliance in the coming weeks.

These asks make up only a small amount of what the Poverty Alliance will be asking parties to commit to in this election, and it is essential that they all form part of a new extensive and robust anti-poverty strategy for Scotland. Previous strategies have had limited success and with the devolution of new powers, and new opportunities, to the Scottish Parliament, now is the time to seriously think about how we end poverty in Scotland. It is important that people directly experiencing poverty are at the heart of this process, and we would like to see Scottish Government convene a Poverty Stakeholder Forum involving people in poverty to oversee the ongoing development of anti-poverty policy.

Tackling poverty isn’t easy but the fact that we have people in 21st century Scotland having to rely on food banks to feed themselves and their families is unacceptable. Politicians must seize upon the opportunities presented to them and be ambitious about what we can achieve for Scotland.