Engender has joined a coalition of charities including women’s and equalities organisations, anti-poverty groups and the Scottish Trades Union Congress to release a paper calling on Scotland to use new powers over social security to promote women’s equality and diverge from the damaging UK policy of joint payments of Universal Credit.

The paper argues for the new Scottish Parliament to automatically pay entitlements to Universal Credit individually, rather than to one member of a couple only. The model of household payments would reinforce women’s inequality in society, and undermine equal access to income and financial autonomy. Where women and children are at risk of abuse, household payments would further compromise their safety and reduce their ability to secure safe housing.

Emma Ritch, Executive Director of Engender, which led on the report, said:

‘Scotland has pledged that new powers coming to the Scottish Parliament will be founded on dignity and respect. Offering individual payments is a clear way to honour this pledge. We know that the UK system of offering household payments fails those who need the most support, including women, disabled people, and refugees, and exacerbates existing inequality.

There are multiple reasons for the Scottish Government to diverge from the payments structure of the UK, and very few to support the case for simply replicating the UK system. We hope that Scotland’s new Parliament elected on May 5th will embrace this clear opportunity to set Scotland on a path of equality in social security.’ 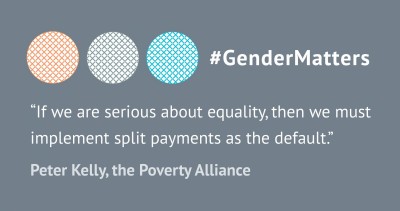 Peter Kelly, Director of the Poverty Alliance, a signatory to the report, said:

“It is important that where a couple has a joint award of universal credit, the default position should be that the payment is split to ensure that individuals have access to independent resources.

“This is particularly important for tackling the gendered nature of poverty, and ensuring that women are not trapped in abusive relationships as a result of lack of financial resources.

“Women can also face significant barriers to entering the labour market, and a lack of independent financial resources would be yet another hurdle for women to overcome.

“New powers for the Scottish Parliament are an opportunity to think about the type of Scotland we want to live in, and take practical steps to achieving this.

“If we are serious about equality, then we must implement split payments as the default”.

“The introduction of a single Universal Credit payment to joint claimants will mean a loss of independent income for women. In an abusive relationship, it is likely that this will be to the detriment of women and children. Financial independence and security is key to gender equality and the STUC Women's Committee urge the Scottish Government to use their new powers to introduce individual payments to all Universal Credit claimants.”

"The single household payment is a backwards step for women and replicates the very patriarchal values and structures that are the cause and consequence of domestic abuse.

"Research suggests that 89% of all women who are abused by a partner, experience financial abuse as part of domestic abuse so to cut off what is, for many women, their only independent income is clearly shortsighted, unhelpful and dangerous.

"The single household payment will only increase women's financial dependency and place them at increased risk."