Guest Post: Gender Equality and the legal profession. What is being done in Scotland to create a balance?

Last month, our Executive Director Emma responded to an article written by Rob Marrs, head of education for The Law Society of Scotland, which looked at the gender-split within the legal profession. You can read the original article here. 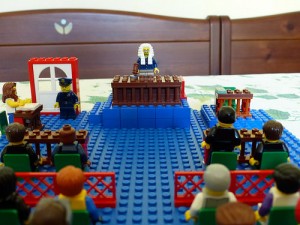 In this blog post, Rob expands on his article and discusses what The Law Society of Scotland is doing to promote gender equality within law.

As part of my role heading up Equality & Diversity at the Law Society of Scotland I write blogs about topical E&D issues. The reason for this is to try and get the legal profession talking about these matters and, in doing so, hope that discussion (alongside a range of activity) leads to change in the profession.

A few weeks ago, The Herald picked up on one of my blogs and turned it into a news story. This was the first time I’d ever written a blog about men – and whether or not we needed to do more to assist more men to consider studying law and then enter the legal profession.

It is perhaps worth noting that the first time I wrote about men it was front page news whereas whenever I’ve talked about gender equality more generally that hasn’t been the case. Many people, and some groups, worried that the Society was placing its focus in the wrong place. Rather than admission to the profession we should worry about vertical segregation: why does the average man (FTE) in the profession earn so much more than the average woman (FTE)? Why are there so comparatively few female partners? Why are there so few female judges and sheriffs?

The gender balance at point of admission is between 65%-70% female on a year to year basis (and that will continue). Women have outnumbered men for 23 years in a row. That is worthy of investigation and comment. Fundamentally, we believe that considering gender equality at admission is not incompatible with demanding that the pay gap be closed or working towards ensuring there are more female partners and more female solicitor-advocates. They are two sides of the same coin.

Over the last twelve months, we hosted a seminar on the gender pay gap in the profession at our annual conference. We’ve launched equality and diversity standards for the profession (we hope the implementation of which will accelerate in the coming months and years and were delighted to see that this formed part of the Scottish Government’s tender documentation for their legal services panel). We’ve shone a very public light on the gender pay gap in the profession (and are gearing up for the rest of this year to have a challenge on pay). We’ve also published recommendations for making the judiciary a more diverse place (including supporting the use of the tipping point).

Added to this, to support those returning to work our members have crafted parents in the profession guidance. We’ve also begun to write more frequently to try and provoke discussion: Why gender equality isn’t just an issue for women, Equality means business, bridging the gender pay gap and – of course – what about the men?

We will, this year, continue our challenge on pay to battle the pay gap. Finally, in our annual survey of members, we asked what further action they wanted us to take relating to equality & diversity and found broad support for continued work in this area. This is a wide range of work but we know there is more to do.

If there are things that we could do that we aren’t doing we would love to hear suggestions from interested bodies and individuals. We know that a lot more needs to be done to ensure that all can access and succeed in the profession irrespective of their gender but we are absolutely committed to ensuring that work is done.