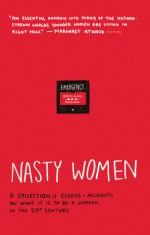 “This is an emergency. Tell your stories and tell them loud.” declares the brief preface to Nasty Women, the eagerly awaited collection of essays published by 404ink, Scottish publishing’s new wunderkind. Commissioned as both a response to and in defiance of the now infamous description of presidential candidate Hillary Clinton by Donald Trump, the collection contains twenty-one essays written by playwrights, poets, punk-rockers, photographers and more.

Nasty Women presents a diverse array of voices on a wide range of topics, billed as ‘a collection of essays and accounts on what it is to be a woman in the 21st century’. Claire Heuchan, who blogs as Sister Outrider, gives a powerful account of her experience of black womanhood online, and criminology student Katie Muriel opens the collection with an immediate and disturbing snapshot of the aftermath of Trump’s victory in the presidential race on November 8th. In 'Go Home', the writer Sim Bajwa looks back at her parent’s experience of immigration and considers the growing prevalence of racist and anti-immigration rhetoric in the UK, writing “It feels like a betrayal, first by politicians, then by the general public.”

'Resisting by Existing: Carving out Accessible Spaces' by freelance writer Belle Owen highlights the discrimination often faced by wheelchair users when seeking access to music venues and other similar locations. Music appears as a recurrent theme throughout many of the essays in Nasty Women, whether by involvement in the gig scene or appreciation of a particular artist. The archetypal ‘nasty woman’ is questioned and deconstructed in Becca Inglis’ essay on Courtney Love, who uses a profile of her idol to explore her own experience of depression. Petrol Girl's Ren Aldridge is unapologetically blunt in addressing consent and gendered violence in the punk rock scene as a "whole community problem" that it is not the responsibility of survivors to solve in her essay, ‘Touch Me Again and I Will F**king Kill You’.

A panel of four of the contributors were in attendance at the packed-out launch of Nasty Women in Glasgow. Blogger Claire Heuchan, mentioned above, opened proceedings by reading an excerpt from ‘Black Feminism Online: Claiming Digital Space’, an important piece about inhabiting digital spaces as a black woman. Speculative fiction author Laura Lam looked back from the 21st century, sharing a genealogy of ‘nastiness’ through the storied histories of the complex, challenging women in her family with the audience. Archivist and poet Mel Reeve presented her blistering reproach to the concept of a 'right kind' of rape survivor, a deeply personal essay that is even more visceral when read aloud. Her essay confronts the image of the 'perfect survivor', and is an extremely relevant piece: Rape Crisis Scotland has just launched their 'I just froze' campaign, aiming to “challenge and change common misconceptions that there is a right or wrong way for people to react during or after a rape”. Playwright Jen McGregor's 'Lament: Living with the Consequences of Contraception’ benefited from live-reading on the night: the epistolary framing that was a jarring interruption on the page became a demanding performance piece on power, choice and women’s bodies.

There are a number of other excellent essays in the collection, which contains twenty-two pieces in total. Some essays in Nasty Women are ruminative in tone, sitting well alongside their more defiant, demanding sisters and showcasing a breadth of both considerable writing talent and a diverse variety of women’s experiences. As a whole the collection is marked by a desire to foreground women’s responses to these often troubled times in which we live, and to demonstrate that it is entirely possible to promote publishing that seeks to be both representative and intersectional. Margaret Atwood describes the book as “an essential window in to many of the hazard-strewn worlds younger women are living in right now”, and in reading the essays contained in Nasty Women it is clear that she is not over-exaggerating.