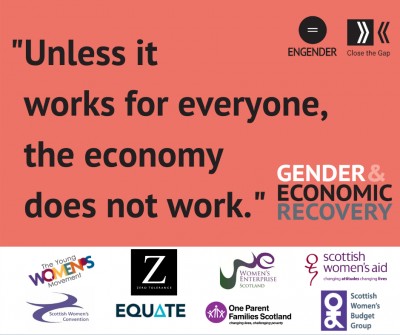 Leading women’s organisations have today called for a radical rethink of how Scotland’s economy can recover from the downturn caused by Covid-19. Nine principles for economic recovery, produced by Engender and Close the Gap and endorsed by national women’s and parenting organisations, call for a shift in the way that Scotland’s pursues inclusive growth. Ranging from investment in social care as infrastructure to the use of gendered economic indicators in place of GDP, the paper argues that unless it works for everyone, the economy does not work.

They also highlight that many of the frontline jobs which are now seen as vital, and which also bear the greatest infection risk, are dominated by Black and minority ethnic women. Disabled women are also shown to be particularly at risk from an ungendered economic recovery, bearing the brunt of a decade of austerity and social care cuts. The organisations are calling for participatory economic decision-making which benefits all women.

“As Scotland enters Phase 1 of lockdown measures easing, economic recovery is a long way off. But in order for that recovery to work for women as well as men, we can’t rely on the traditional stimulus measures that create ‘jobs for the boys’. Covid-19 has been a wake-up call for many about how much we separate the unpaid care our society relies on from our understanding of what the economy is. In fact, care is an economic issue.

“The recovery gives us an opportunity to think about what truly matters to people – wellbeing, community, and solidarity. We need to create the demand for goods and services that will sustain our local economies by investing in public services and putting money directly in women’s pockets. Decision-makers must recognise that the economy and women’s equality go hand in hand.”

“Women’s work is systematically undervalued in the economy, including work that is critical to the Covid-19 response such as health and social care, retail and cleaning. Public investment is central to increasing pay in these sectors. 50 years on from the Equal Pay Act, pay equality remains elusive for many women. Scotland has a plan to close the gender pay gap, but we need bold action on what Covid-19 has exposed, that women’s work is undervalued, underprotected, and underpaid.

“Scottish Government is committed to inclusive economic growth, but there’s a lack of detail about what that means for women. These principles provide a foundation for a model of inclusive growth which will ensure women aren’t left behind.”

The nine principles for an economic recovery which works for women are:

1. Equality is good for growth. The converse isn’t necessarily true. As women and men had different levels of economic wellbeing before Covid-19 that have been deepened by the crisis, the principle of equality and non-discrimination must be core to the economic recovery. Inclusive growth means including all men and women in the process of growth and ensuring that the outcomes of growth are used to meet the needs of Black and minority ethnic, disabled, LGB & T, and older and younger women.

2. Gender-sensitive inclusive growth is about the pattern of growth and not its rate. Repatterning growth means seeing the poorest women’s income rise both along with the poorest men’s and also relative to men’s as a group.

3. Creating aggregate demand should mean cash transfers to women and their dependent children, so that women have money in their pockets to spend on goods and services in their local economies.

4. Inclusive growth means investing in a care economy. Care is as essential to our economy as bricks, steel, and fibre optic cable. Investment in childcare and care for disabled people and older people should be considered as necessary infrastructure for a sustainable wellbeing economy and a good society.

5. Unpaid domestic and care work needs to be recognised, reduced, and redistributed from the household to the state by an increase of accessible, good quality childcare and social care. Within households, men and women should be enabled to do a 50/50 share of paid work and unpaid work.

6. Women’s work in care, cleaning, catering, retail, and clerical roles has for too long been undervalued, underpaid, and underprotected. State and public body wage-setting powers should be used to increase pay in these sectors and improve their conditions of work

7. Economic success shouldn’t only be measured by GVA or GDP but by an increase in wellbeing of the people of Scotland. Gendered wellbeing indicators should take a human rights approach, and measure the extent to which all groups of women and men have an adequate standard of living, including access to housing, social protections, and health.

8. Public spending and revenue-raising decisions shaping Scotland’s economic recovery and the re-set of the economy must integrate gender analysis across budgetary processes. This includes allocation of resources, scrutiny of spending, and outcomes from public finance decisions.

9. Scotland’s economy should be governed by gender-balanced, gender-competent leaders, making decisions based on intersectional gender-sensitive sex-disaggregated data. A healthy economy is one that provides equality for all, including between all groups of women and men. Black and minority ethnic, disabled, LGB & T, and older and younger women must have power to participate in decision-making about their economy.

The principles have been submitted to the Scottish Government Advisory Group on Economic Recovery, and are endorsed by: