GUEST POST: Being a Black Woman in Scotland: A Unique and Complex Experience

In this guest blog, Aleisha Omeike writes for Engender about the need to recognise the unique experiences of Black women. Follow Aleisha on Twitter at aleisha_omeike.

CN: this piece references and quotes racist language and slurs.

In this piece, I have shared some of my opinions and observations being a mixed-race woman (White Scottish and Black African) in Scotland. The experience of Black (and minority ethnic) women in Scotland is a unique and complex one. I have chosen to discuss two of the most under addressed of these experiences, including the ongoing trauma and detrimental influence racist abuse can have on women of colour and the hypersexualisation of Black women.

With the large engagement in the Black Lives Matter Movement, I hope that Scotland can begin implementing the change so desperately needed to start improving Black women's experiences.

In Scotland, young women are very susceptible to racism. I feel it is important for people to understand that racism is a type of trauma, one that is disproportionately experienced by Black people and Black women. Racism has long-lasting impacts on women’s mental health and can do inconceivable harm to self-esteem and self-assurance.

Many of my experiences of racism growing up in Scotland have been with racial slurs. Such experiences stay with me to this day. I remember the first time I ever experienced racial abuse. I was around 5 years of age. I was at school, I had come out into the playground after lunch. Some girls in the year below me were pointing directly at me, shouting and dancing. At first, I was unfazed as I could not make out nor comprehend their toneless chanting. Listening further I recognised the lyrics: “Aleisha is a blackie”. It took seconds to cognitively digest. When it did, it stung, worse than any tangible or physical wound. Since this first incident I endured many others similar, being called a “black bee”, “black bitch” and many other slurs. For decades I suffered serious issues with my self-esteem and always felt people would judge or mock me based on the colour of my skin. Undoubtedly, other BAME young girls have the exact same kind of story to tell.

In Scotland, the repercussions women face as a result of racism, such as in the example given above, often go completely undiscussed. I share my experiences and the emotional aftermath in the hope of highlighting how pressing an issue this is. I feel many BAME women mask the self-doubt racial abuse can and often does evoke and its influence on mental health. As a psychology student, I am considerably passionate about promoting positive mental health. Studies have shown that many ethnic and racial groups experience higher rates of Post Traumatic Stress Disorder, as emphasised by Apu Chakraborty, Lance Patrick and Maria Lambri in their book ‘Racism and Mental Illness in the UK’. I believe Scotland needs to put more funding and effort into forming psychological approaches to help people recover from racial trauma. BAME adolescent women are in need of increased support and guidance where they have experienced racism, particularly when it has occurred as they mature. 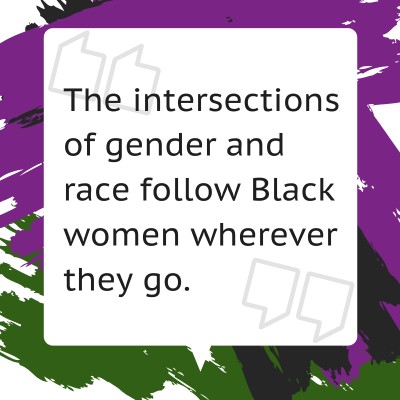 I believe the media fetishises Black women an incredible amount. I find that in Scotland, I have been subjected to a lot of unwanted sexual evaluation. I find that often any male attention I receive is motivated by a fetish of some sort. Black women are painted as sexual deviants and animalistic she-devils. This is an image that has been maintained for decades, however, I find that in recent years it has been further fed. The intersections of gender and race follow Black women wherever they go. Even evaluating myself I can see that as a Black mixed-race woman I am sometimes guilty of upholding the narrative.

I hope I am not misunderstood, I am fully aware and acknowledge that unfortunately, all women are subject to sexual objectification. However, my own experiences have taught me that people in Scotland more frequently view Black women as sexual objects. I have noticed that the way men approach me in clubs and bars at times is significantly different to the way they approach my white friends and peers. They normally initiate conversation by addressing my “nice ass” or by asking if I can twerk. Meanwhile, their companion is asking my friend what university she attends. Such instances are even more common and all too familiar for Black women. This gets very frustrating and I think it unfair that people will not assume a woman possesses intellect based on the colour of her skin. Furthermore, it is important to recognise how this behaviour and mindset allows long-standing stereotypes about Black women to persist. This makes it difficult for an already marginalised group to gain adequate job opportunities, to have access to important resources and to pursue goals.

I find it very difficult to address this issue. As women, we are taught to appreciate the male gaze and be grateful for a man’s recognition. Furthermore, intervening and trying to educate someone in a situation like the one mentioned above often results in the default retaliation; concluding you are just another ‘angry black woman’. While it is clear the new feminist agenda aims to highlight the matter, it still needs properly addressing. A lot of people in Scotland are blissfully unaware of the harm that hyper-sexualising Black women and women in general can do. The media has normalised sexualisation of Black women for too long. Important discussions need to be generated and there must be more campaigning aimed at drawing attention to Black women’s experiences and holding men (and women) and the media accountable. Scottish and worldwide media outlets need to be more aware of the way they poorly represent Black women.

Black women should have the authority to acknowledge their own power, presence and sexuality and be able to negotiate the way others look at their bodies on their own terms.

Scotland Must Do Better

The issues mentioned above are only a few so frequently faced by Black and minority ethnic women in Scotland. We, as a country, must work to amplify voices of Black and minority ethnic women. Hopefully, by encouraging BAME women to tell their stories this will bring readers new understandings. This will allow people to evaluate and change their behaviours and attitudes where necessary.