Did you hear the one about the aid executive exploiting women in Haiti? 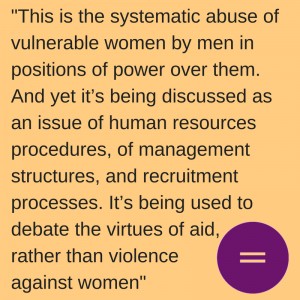 The UK Government should dedicate budget to international development.*

International development organisations should not enable their staff to engage in sexual exploitation, or to sexually harass or assault colleagues or beneficiaries.

I do not see a contradiction within these two sentences.

For those of you who don’t know what I’m talking about, allegations came out at the weekend about senior Oxfam staff in Haiti purchasing, and enabling the purchase of, sex from women in Haiti in the aftermath of the 2010 earthquake.** Some of the staff in question had faced similar accusations while working in Chad a few years before. Some of the staff were allowed to resign rather than be fired.

There are allegations that Oxfam covered up the details of the accusations both to the charity commission and to the UK Department for International Development.

There have been reports by whistleblowers of rape, abuse, harassment and of women being coerced into sex in return for aid. There have been allegations of sexual assault of minors in countries where Oxfam runs aid programmes, and in charity shops in the UK.

This is not about ‘a few men not being able to keep it in their trousers’. And it’s not about liberal hand-wringers trying to criticise Haitian women who may have been ‘glad to get the sex work’. It’s not bad apples, and it’s not an industry out of control.

This is the systematic abuse of vulnerable women by men in positions of power over them. And yet it’s being discussed as an issue of human resources procedures, of management structures, and recruitment processes. It’s being used to debate the virtues of aid, rather than violence against women.

Of course the right-wing press will use this to bolster their anti-aid agenda. And of course people who support international aid work are worried about losing support and funding which are going towards valuable projects.

But supporting a charity doesn’t mean turning a blind eye to human rights abuses. It should mean the opposite. If you support Oxfam and want to defend international aid, you should be horrified by this story. You should be troubled at the implication that police in some countries shouldn’t be informed of violence against women that they themselves have criminalised. You should be appalled that senior men working for Oxfam (and other aid agencies and peacekeeping forces) see a situation where ‘the rule of law is not functioning’ as the extension of impunity. You may, like us, be troubled by a succession of public statements by Oxfam that make no mention of violence against women and women’s equality.

It beggars belief that any aid agency could appoint senior staffers who did not know that they shouldn’t contravene UN guidelines for international aid workers, or break Haiti’s own prostitution laws. It is startling that any guidance should have to be provided that purchasing sex from people relying on your organisation for shelter and food following a horrific natural disaster isn’t the best way to proceed. But perhaps an indicator of how far a grim culture had taken root was the fact that some of the perpetrators apparently referred to their Oxfam-funded accommodation as ‘the whorehouse’.

A piece this week in the Times (£) from an aid worker who blew the whistle on sexual exploitation says that Oxfam’s reporting processes are regarded as some of the best in the sector. The special taskforce and whistleblowing hotline set up after the initial allegations are substantively better than the offer at similar organisations. And yet it is clear from the continued revelations and allegations coming from the sector that these measures were not enough.

We are supposed to be reassured that Oxfam has now put in their code of conduct that their workers shouldn’t pay for sex with beneficiaries of Oxfam’s aid programmes. And while other measures announced such as overhaul of induction processes, strengthening of the whistleblowing hotline, commitment to report crimes to the police and to make sure that staff have committed serious misconduct aren’t hired by other aid organisations are clearly welcome steps, the need for them to be announced is similarly staggering.

Accountability and justice mechanisms are vital parts of tearing down a culture of impunity. But they offer cold comfort to women and girls who have been victimised by men following disasters and crisis. We know that preventing violence against women is better than all of the support services and justice systems in the world. What Oxfam hasn’t yet done is live up to its strategic ambition for women’s equality 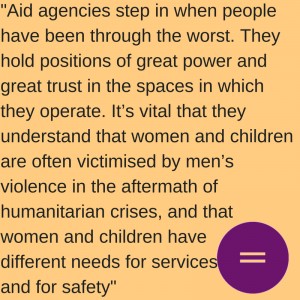 Things they haven’t (yet) said they will do include internal education about violence against women as a cause and consequence of women’s inequality, conduct a gender pay gap review, hire more women to senior positions, read reports produced by other aid organisations about sexual assault in the sector (Save the Children detailed serious allegations in a widely discounted report in 2002), or even listen to the woman they appointed to lead their own safeguarding initiatives.

It should go without saying that aid agency staffers should not be the perpetrators of sexual violence and exploitation, either of beneficiaries or of their own staff. To make that a reality, rather than an aspiration, aid agencies need to get serious about understanding how gendered inequality affects women and children. They need to commit to anti-sexist practice in their organisations and on the ground. They need to apply the same determination they bring to messy, complicated humanitarian disasters to ending violence against women and girls.

*I mean, it should do it in the form of slavery reparations, overdue payment for stolen resources, cancellation of unjust debt and paying to fix the climate change we caused, but that’s for another blog.

**FUN FACT: one of the reasons Haiti was so impoverished, and therefore less able to respond to the earthquake is that until the middle of the 20th century it was paying a debt to France. The source of the debt? Compensation for the loss of income from freed slaves.

Thanks Alys. Couldn't agree more. Read an interview with the Oxfam CEO in the Guardian. He was like a rabbit in the headlights. Couldn't understand the extent of public anger (and vitriol). He suggested that "it's not as if we were killing babies in their cots". Apart from the odious comparison, the inference is that assaulting and violating young girls and women isn't so bad?