#Engender25: Engender's early days and the challenge of definition 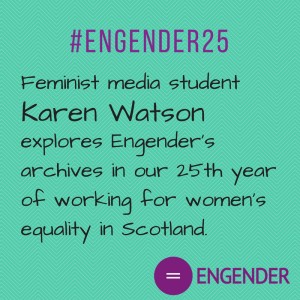 Engender is working with the University of Stirling to host a student placement who will be exploring Engender's archives as we celebrate our 25th Anniversary.

Karen Watson worked for a large financial organisation for almost 20 years before deciding to return to University to follow her dream of getting involved in feminism and gender equality studies. She lives with her son, two cats and a dog and hopes to go on to PhD study in the Autumn.

Here's her first blog for Engender, charting the early discussions about purpose, vision, and the challenge of definition.

Engender was launched in 1993, in the year of the 75th anniversary of women getting the vote in Britain. Now, 25 years on, I have been looking through documents from those early days and was struck by what challenges the organisation faced and how things have changed over the years.

Engender first described itself as ‘a new research and campaigning organisation for women in Scotland’ and arguably the most useful work to come out of Engender was the Gender Audit which was published twice a year and won a European Equality Award in January 1997. However, it was a small organisation with limited resources, and board papers show that there were some concerns over how best to explain to women just what Engender could offer them. Obtaining funding and being granted charitable status also proved challenging.

In 1996, board members raised the need to focus on their marketing campaign, to explain exactly what Engender was and what members could get from belonging to it. One early volunteer expressed concerns that Engender was bound up with "waffle and vagueness...and are short on plain speaking". It was agreed that there should be greater focus on making it clear what their main aims were, and that through better marketing, the organisation would be able to reach out to women from all walks of life, gaining their interest by having a vision which they could relate to and feel impassioned about.

When charitable status was sought in 1997, Alexander Stone solicitors advised Engender that it would not be granted unless they could show that the organisation was mainly concerned with collecting and disseminating statistics in relation to women’s issues. They were urged to down-play the campaigning aspect, stressing that this could only be a by-product and ‘certainly not of a party-political nature.’ They also advised against using the phrase ‘increasing women’s power and influence.’ In March 1998, Engender modified their objectives so that ‘influencing policy’ was changed to ‘informing policy’ and ‘to lobby and campaign’ replaced with ‘to make representations.’ 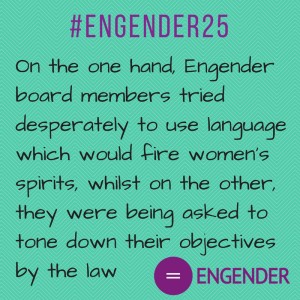 This must have been a difficult predicament. On the one hand, Engender board members tried desperately to use language which would fire women’s spirits, whilst on the other, they were being asked to tone down their objectives by the law. Finally, two years later, the Inland Revenue agreed that Engender could be recognised as a charity… if the constitution was changed slightly. The suggested words ‘to promote gender equality’ were firmly rejected by the Inland Revenue in favour of the more specific, binary phrase ‘to promote the equality of women with men.’ Although promoting the equality of women with men was seen as a purpose which was charitable in law, influencing government policy and campaigning on issues of equality and gender was not.

This made me wonder why issues of equality across the gender spectrum were not treated in the same way as equality between women and men. Were trans, intersex and non-binary individuals not recognised, or did they have their own category of ‘other’? It seemed a great challenge to truly develop a vision within these boundaries. However, Engender did eventually secure charitable status in June 2000, but not before such changes had been made.

Definitions are clearly important, but can often be exclusionary or miss the point, especially when they are shaped by dominant, normative ideologies. It is unfortunate that forward-thinking organisations such as Engender have had to work within such confines, but it is a credit to them that these difficulties have not dampened spirits nor forced them to give up. Membership has increased, and they now have organisational and associate members. Their aim is concise and clear: Engender is Scotland’s Feminist Organisation. I for one have been impressed and inspired by the courage and determination of their board members over the years as they have continued to strive for equality for women, with a definite goal: ‘Our vision is to secure social and economic equality for all groups of women in Scotland.’ What woman in Scotland cannot relate to that?