Nina Murray, the convener of Engender's board, accepted the award. Her speech honouring Emma is shared here.

It’s an honour to accept this lifetime achievement award on behalf of Emma Ritch, especially today, on her birthday.

Emma’s lifetime was so much shorter than it should have been, and her death earlier this year was cruel both for those of us who knew and loved her, but also for all the women of Scotland. The extra years Emma deserved would no doubt have brought great changes in women’s rights and equality in Scotland.

Emma was a feminist. This drove her life and work, leading her eventually to Engender where I have the honour of being convener of the board, and which Emma led so ably for the past eight years.

Emma’s feminism included all women, and was bold, compassionate, and intersectional. She faced criticism - both from men’s rights activists who objected to her championing of women’s equality, and more recently from those who do not see a place for trans women in our movement.

Emma’s death has left the feminist movement in Scotland poorer, but with a rich legacy.

Her passion for the incorporation of the UN Convention on the Elimination of All Forms of Discrimination Against Women is bearing fruit, and in the next few years we will see women able to cite CEDAW in domestic courts as they defend their rights.

Misogyny and endemic sexism is being taken seriously and given the consideration it deserves. Funding for violence against women services has been extended. Public space, social security, and healthcare are all now accepted as key battlegrounds for women’s equality. Abortion services are easier to access, and great strides have been made towards women’s equal representation in public life.

Emma’s legacy will also exist for us all in a more personal way: with a well-chosen lipstick, a new piece of stationery, or any time we simply ask ‘where are the women?’. 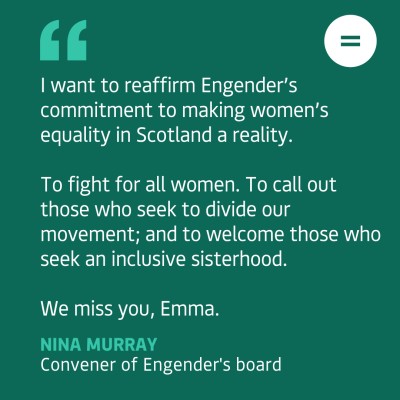 The tributes that poured in for Emma from around Scotland - and the world - when Engender announced her death, were truly touching, and showed just how worthy Emma is of receiving this lifetime achievement award. I know that many people, myself included, ask themselves, almost daily, ‘What Would Emma Do?’, and we know the answer, because Emma said it herself so often.

We must speak truth to power, especially when our voice shakes.

So in closing, I want to reaffirm Engender’s commitment to making women’s equality in Scotland a reality.

We miss you, Emma.