If this general election campaign will be remembered for one thing, it’s the role played by women and by Scotland in a political culture that was utterly unprepared to share the stage with either. Whether it’s a London based media waking up to the fact that Nicola Sturgeon exists (and that she happens to lead a country) or whether it’s a generation of voters seeing Green Party of England and Wales leader Natalie Bennett, Plaid Cymru leader Leanne Wood and Nicola Sturgeon breathing life into this election and challenging the austerity consensus, it’s clear that politics has changed. As Lesley Riddoch, put it recently, what we’re seeing is “the end of the Big Man and the start of the assertive woman as the preferred model for political authority”.

Yet the visibility of women in this election is disguising how little has really changed for women, whether in the political sphere or outside it. We’re voting in this election on who we want to represent us in a parliament in which the proportion of women MPs has only ever reached 23%. Shockingly, until 1997 women had never comprised more than 10% of all MPs, and until the 1980s the proportion had always been below 5%. Whilst reaching 23% clearly represents some progress, it will take more than 80 years to achieve equality in parliament at the rate we’re going. 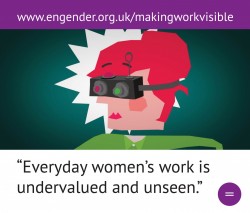 Outside of politics, inequality is still the name of the game. Although there has been some progress, the gender pay gap remains stubbornly high at over 19%, despite the Equal Pay Act becoming law more than 40 years ago. Women still make up a large proportion of low paid professions such as cleaning, caring and cooking and find themselves locked out of higher earning jobs such as engineering, law and IT. Beyond the formal workplace, women still perform the majority of caring and domestic roles in society, often hidden from view, taken for granted and undervalued financially as a result.

These structural problems around work and equal pay contribute towards, and are perpetuated by, societal attitudes about women’s roles. Day in day out, women are portrayed in the media as young, white, slim, conventionally attractive, passive and sexually available. Our purpose is to be seen (and touched) but not heard. Any woman not conforming to these (often unconscious) expectations is seen as, at best, a failure and at worst, as dangerous. It’s no coincidence then that Nicola Sturgeon has been portrayed as “the most dangerous woman in Britain” by the Daily Mail or trivialised and sexualised by the Sun.

Polling for TNS-BMRB shows that just 55% of women across the UK are certain to vote in this election. The campaign group #XXVote launched this year in response to the fact that just 39% of young women aged 18-24 voted in 2010, compared with 50% of men in the same age group. Whilst this unwillingness to engage in a process where women are either invisible or ridiculed is understandable, as #XXVote points out, “if we don’t vote, we don’t matter”. This disengagement makes young women an easy group for politicians to ignore. 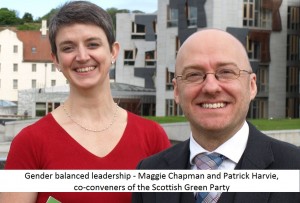 How then should we change the status quo and get more women on the ballot paper and in the voting booth? Firstly, women need to see themselves reflected in the political choices on the ballot paper, and to get them on the ballot paper, we need affirmative action. In the Scottish Green Party, our gender balancing policy means that winnable seats have to have a woman candidate and that no less than 40% of any group of candidates should be of either gender. This means that our lists for the Holyrood regions are “zipped” with alternate men and women on the list and that half of the party’s lists for Scotland’s 8 regions are headed by a woman. In the general election, 42% of our candidates are women - the highest of any political party in Scotland.

As one of the 42% I have to say I’ve found this campaign incredibly empowering. Despite the odd patronising comment from UKIP and Tory candidates and a few tweets that focused more on how I looked than on what I said, I’ve found that most people have been hugely supportive and encouraging. I suspect that this positive experience is partly the result of luck, but I think that our collective experience as a nation over the last couple of years, engaging in political discussion and participating in our own future, has empowered all of us in Scotland. Campaigning alongside strangers who quickly became friends, we learnt to encourage one another to stand up and speak out.

For me, and for the thousands of others involved in groups like Women for Independence, Common Weal or Radical Independence, the experience of campaigning for the future we wanted to build has shown us that power is ours to use. As the acclaimed writer Alice Walker once said, “the most common way people give up their power is to think they don’t have any”. So perhaps it’s little wonder that women (and men) in Scotland are far more likely to vote in this election than others across the rest of the UK. I for one look forward to using my vote and my power to keeping politics changing for the better.

This blog is part of a series that Engender have commissioned looking at sexism in the run up to the general election - we have approached all political parties in Scotland to contribute as well as other relevant groups.