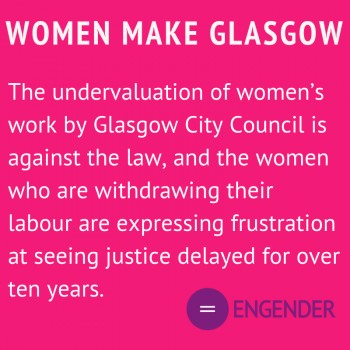 Engender stands in solidarity with the striking women workers of Glasgow City Council.

The work of carers, cleaners, caterers, and learning assistants has historically been undervalued and underpaid. This undervaluation of women’s work by Glasgow City Council is against the law, and the women who are withdrawing their labour are expressing frustration at seeing justice delayed for over ten years.

Low-paid workers have not taken the decision to strike lightly, and we are making a small donation to each of the GMB and Unison strike funds to help ensure that their action does not result in further financial hardship

We know that there is no shortage of unfairness to be found as historic unequal pay is resolved. Today’s politicians and officials are wrestling with the result of decisions that were taken before their time, with finite resources. Unions have not always been led by the interests of their female members. But the sharp end of the injustice has always been pointed at the women workers who have cleaned, cooked, cared, and helped children to learn. The wellbeing of our communities depends on their labour, and their work should be fairly paid and fairly valued.

Our equal pay law was forged by the collective action of low-paid women who were tired of economic inequality. The women striking today are standing on the shoulders of the women tram and bus conductors who organised the first equal pay strike in the UK in 1918, and the Dagenham workers who went on strike in 1968, leading to the Equal Pay Act.