Women and the Scottish Parliament Elections

May 6th marks the 2021 Scottish Parliament elections - where MSPs are (re)elected, and a party (or parties) chosen to form the Scottish Government.

This blog summarises all of the work Engender have been doing in the run up to the elections.

Our Manifesto ‘Vision for a Feminist Recovery’ includes specific and targeted asks for political parties on a range of issues of women’s equality, grouped around 8 key areas: 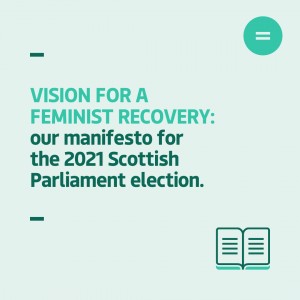 Our Policy and Parliamentary team have been working to engage with political parties to see our asks for women's equality reflected in their manifestos.

This year, 25 different parties are standing in the Holyrood election, so it can sometimes be a bit overwhelming to understand what they all think about different issues.

As ever, then, we've produced our 'gender edits' where we list the commitments made by parties that explicitly reference women’s equality, or which are directly associated with Engender’s asks in our Vision for a Feminist Recovery Manifesto. While many other areas or commitments will be of great interest to women such as policies around rent, primary health care or climate change measures, for example, unless the party themselves has noted a specific commitment to advance women’s equality or rights we have not included them in this particular summary. Nor have we included commitments for which power and responsibility rests with Westminster or, in the main, those that take the form of broad statements expressing positive attitudes towards equality without a substantive commitment.

You can access the document which covers each of the five parties elected in 2016 here: A Gender Edit of Party Manifestos 2021

We've also produced a supplementary document which summarised the commitments of the other 20 parties running for election in 2021, here.

In April, along with 14 other women's organisations across Scotland, we hosted a party leaders' hustings for women's equality.

You can watch a recording of the hustings here:

On the Engender: Election Special podcast

We recorded an episode of our feminist policy podcast, On the Engender, looking at the election. On it you can hear from Engender's Executive Director Emma Ritch and Policy and Parliamentary Manager Eilidh Dickson as they discuss Engender's manifesto, the party leader's hustings, and what the election means for women in Scotland.