Women and the referendum (Indyref Thursday #6) 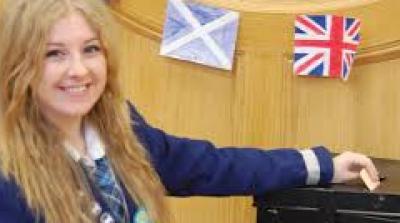 In the run-up to our event on 'gender equality, the referendum and beyond', we'll be publishing a weekly blog to correspond with our 'Scotland's futures' briefing papers series. This week, Engender policy manager Jill Wood writes on the implications of the referendum for the women's movement .

The referendum context has generated much thinking about alternative visions of society across civic Scotland, and the difference that constitutional change might make for marginalised groups. Engender has not taken a position on a preferred outcome, but we have been analysing the implications from women’s rights and gender equality angles, providing platforms for debate and consulting with our membership and wider stakeholders for over two years.

Our recent report Gender Equality and Scotland’s Constitutional Futures takes a detailed look at the policy landscape since devolution and sets out how power and responsibility for gender issues is currently divided between Holyrood and Westminster. It also offers some commentary on the implications of independence and the status quo in terms of gender equality, and draws on various events run for our members, with partners at community level, and in collaboration with sector colleagues. These include the discussion series Feminists talk Scotland’s futures, our last two annual conferences, and world café style hustings with campaigners from both sides of the debate.

We have also looked at the gender content of the Scottish Government’s white paper and Scottish Labour’s so-called red paper, and produced briefing papers based on the thematic content of our policy report. Today, we are publishing the last these on the implications of the referendum for gender advocates and women’s organisations in the months ahead.

All of this discussion and thinking has supported three vital points:

There is, nonetheless, a clear range of ways that Scottish Government could take action to advance gender equality under the existing provisions of the Scotland Act. Primarily, it could implement gender mainstreaming approaches to elevate gender concerns within the policy hierarchy and to proactively integrate gender analysis across departments and all levels of government strategy. It could build on the Equalities Budget Statement process to improve gender-sensitive budgeting, it could enforce greater compliance with the Public Sector Equality Duty and strengthen gender components within it, and it could extend and develop legal responses to violence against women.

On the whole, however, the current settlement is far from clear-cut in terms of matters related to gender equality. This has resulted in prevarication from both Scottish and UK governments and all of the main political parties on key issues such as childcare, women’s political representation and poverty. Gender segregation, economic models, employability and the media are other key areas with major policy levers at both Westminster and Holyrood.

At Engender we have always been clear that an independent Scotland would not be more inherently likely to engage with women’s equality and social justice. In 2016, we could potentially give our mandate to a platform that is harmful to women. However, independence would entail structural change, which holds the potential for progress at an institutional level. This would also be the case in the event of significant transfer of more powers under further devolution.

In particular, a written constitution could incorporate obligations on gender equality and provide important recourse for systemically marginalised groups of women to claim their rights, a new social security system would have scope to redress the gender discrimination at the heart of what we currently have, and a new immigration and asylum system could increase protection and wellbeing for migrant, refugee and asylum seeking women. Creating new institutions would present an opportunity to embed and deliver gender quotas and there would be raft of new legislation and oversight frameworks that could be include anti-discrimination structures, including broadcasting, equal opportunities, employment and financial regulation.

Radical change is needed, but the vision is straightforward. We want to see a Scotland where women and men have equal opportunities in life, equal access to resources and power, and are equally safe and secure from harm. We want to live and work in a country where women and men are represented as equals in the media and in public life, have an equal voice in shaping and making political decisions, and where gendered discrimination has been consigned to history.

Regardless of how Scotland votes at the ballot box three weeks from today, Engender will be restating this feminist agenda in the policy spaces that subsequently emerge.

Meanwhile, the significant political attention on women voters in the referendum debate continues unabated. We welcome the spotlight this casts on the alienation that many women feel from the political system and on the need for both campaigns to improve critical engagement with key gendered issues. We’ll continue to support informed debate around the implications for women in the remaining weeks before the vote and to encourage women to have their say, but we will also be working to ensure that this sudden interest in what women think does not drop off the agenda at Holyrood.

It’s hard to believe that this chapter in Scottish political history is almost over. It is also extremely exciting that a new one is about to begin. Under either outcome there will be opportunities for the women’s movement to push for progress on gender issues in the immediate aftermath of the vote. Along with informal debate with campaigners from Better Together and Women for Independence, this will be the focus on our final event on the independence referendum, this Saturday 30 August at the Scottish Youth Theatre in Glasgow. There are a few places remaining and you can sign up here.