Women and indyref: lessons from a constitutional cafe 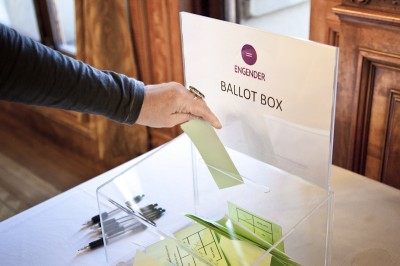 It has become received wisdom that the independence referendum has provoked a public discourse so febrile and uncontained that some kind of peacebuilding will be necessary through September and October this year.

You wouldn't know if from our latest constitutional cafe, which took place last Saturday in the Scottish Youth Theatre in Glasgow. The event brought together women from both Women for Indy and Better Together with practitioners from Scottish Women's Aid, Electoral Reform Society, and Scottish Women's Aid to talk about women's equality and indyref, and where we go afterwards in realising women's equality.

Yes or No, Thanks?

Participants at the event were a healthy mix of those who were yet to make up their minds, and those who had come to a decision. The first part of the session was targeted at the undecideds, in enabling women to talk to indyref campaigners about the possible outcomes for specific areas of women's inequality in the event of a Yes or No vote.

The conversations we've had at our constitution cafes have been quite different from those reflected in the TV debates. Unsurprisingly, given the profile of our membership and the areas we work around, we've had more discussion of anti-discrimination law, social security, equal pay, violence against women, childcare, occupational segregation, and employability.

The most interesting part of the event, for me, was the opportunity to bring women from the campaigns together with issue specialists to talk about the future. Three wide ranging discussions took place on women's economic equality, women's political equality, and women's social and cultural equality. These were chaired by Close the Gap, Electoral Reform Society Scotland, and Scottish Women's Aid respectively.

I dropped in on all three discussions. We'll be writing up the comprehensive notes that were taken at each table, but each of the conversations was circling the point of how to translate the huge energy around indyref into issue-specific campaigning post-September.

The vision, as you might expect, remains for transformational change for women, regardless of the referendum result. We talked about access to justice, the technical detail of changes we would like to see for employment law, an increase in the sustainability of funding for equalities work, how to design a social security system that would address women's needs, increasing the number of women making decisions and women's representation, and ways that we could work together through the autumn and beyond to make sure that gender is part of the discussions that take place then.

Close the Gap, Scottish Women's Aid, and Electoral Reform Society Scotland were great supporters and enablers of the event. Special thanks to Lindsey Millen, Jo Ozga, and Juliet Swann.