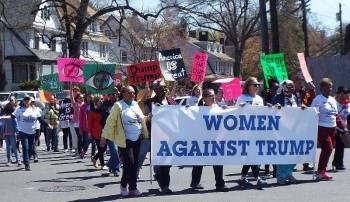 Next week on 20th January Donald Trump will be inaugurated as the President of the United States of America.

Given statements made during the election campaign, many are understandably worried about what a Trump presidency may mean for women's equality, the fight against racism, LGBTQI rights, religious freedoms, violence, climate change, migrant rights, international relations, democratic freedoms and many more vital issues.

Here, we outline some of the things happening in Scotland (and the rest of the UK) which you might want to get involved in.

Please note that we do not endorse these events (except our own, of course!), and would encourage women considering attending to think about the organisers and messaging of any action, and to ensure you feel safe and comfortable in attending. Where appropriate, we have linked to further information to consider before getting involved.

Join Engender and Zero Tolerance to come up with slogans and make banners to ensure there is a feminist presence at any demos you might be attending over the weekend (or just to display at your home/office!)

Several cities are holding anti-trump demos on the day of the inauguration. There will be a whole host of issues talked about at these demos, and it would be great to have intersectional feminist messaging there.

Please note that these demos have been organised by Stand up to Racism, a group who have received criticism in the past for their links to the Socialist Workers' Party (who have a track record of misogyny and endorsing rape culture). Find out more here.

On the day of Trump's inauguration, people across the UK are organising banner drops from bridges to spread a message of unity, not division. There are actions planned in Edinburgh and Aberdeen so far, but plenty more bridges to choose from! There's lots of guidance and a chance to register your action at bridgesnotwalls.uk

In solidarity with the Women's March on Washington, there are women's marches being organised in London and Edinburgh for the day following the inauguration.

The organisers of the march have faced criticisms from women of colour (read this piece explaining why here) so if you are attending, consider your messaging and how sexism and misogyny will affect different women in different ways.

If you hear of any other feminist actions you think we should promote, please let us know. Stay safe, and have fun!