Why There Aren’t Always Two Sides to Every Story

Here at Engender we receive frequent requests to go on the radio, TV or in front of a live audience to ‘debate’ feminist issues.

To discuss whether the pay gap really exists, whether a video of shirtless men doing yoga is proof of ‘reverse sexism’ in Scotland, or whether it’s unfair that women are now allowed to play golf. 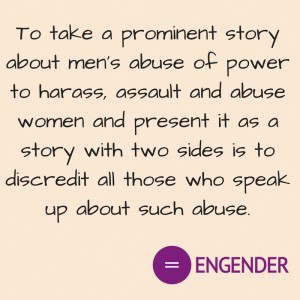 We tend to refuse these requests, and are subsequently charged with failure to represent feminist arguments, failure to take advantage of an opportunity to reach a wider listenership, or simply allowing sexist views to go unchallenged. We argue that to partake in a debate which shouldn’t ever be a debate in the first place is a far more dangerous failure.

Today we had a phone call from the BBC which lead to much face-palming both in the office, and despair from colleagues in other feminist organisation.

We were invited to debate the ‘two sides’ to sexual harassment, in the wake of the Harvey Weinstein revelations, and the success of #MeToo. When pressed for what the other side of this debate could possibly be, we were told that because of the way women are ‘self-promoting’ on social media sites such Instagram men can be encouraged to interact with them in a certain way.

When I had caught my breath, I explained to the poor researcher on the phone that we couldn’t possibly take part in something which reduces the nuanced, intelligent and heartbreaking discussions of the past week to a debate which suggests women play a part in their own abuse.

This is victim blaming, pure and simple. And, even more damaging than this, it is the false creation of a debate where none should exist.

To take a prominent story about men’s abuse of power to harass, assault and abuse women and present it as a story with two sides is to discredit all those who speak up about such abuse. To suggest that women are in any way responsible for the violence perpetrated against them is to deny the culture of violence and patriarchy we live in. And to ask an organisation which campaigns for women’s equality to engage in anything which suggests that sexual harassment is two sided goes against decades of work by those campaigning for an end to violence against women.

The thought that this debate will go ahead is awful. To think that a women who shared her #MeToo story will find herself mentally scrolling through her social media profiles to find signs of provocative posts. That perpetrators of abuse will have yet another mitigating circumstance to cite when justifying their actions. That people whose minds were opened, just a little, by the stories of harassment over the past week, will again see sexual harassment as ‘just one of those things there’s no right answer to’.

This is not an isolated incident. The belief that women’s lived experiences can be debated, analysed and questioned is pervasive. Yet again, the onus is on women to prove their point, to stand up for equality, and to challenge sexist assumptions. Telling our stories is not enough. We must tell them in the right way, at the right time, and to the right people. And then, still then, we have to share our stories, repeat them and defend them.

There are not two sides. Be on the right one.

Thanks to all our supporters who shared this blog. Particular thanks to Rape Crisis Scotland and other violence against women organisations who supported our stance and refused to participate. We’re really pleased that the BBC decided to drop this segment, and we will continue to engage with them to discuss how women’s equality issues can be presented in ways which don’t risk re-traumatising women. Stay tuned for further blogs exploring this vital area of women’s representation.