This week marks Carers Week, and it comes after two years which have shown, more clearly than ever, the vital role that unpaid carers play. The Covid-19 pandemic highlighted what half of the population already knew – that women take on the vast majority of unpaid care work, and that without them our society and economy could not function.

The Scottish Government has been consulting on their proposals to replace Carer's Allowance with a Scottish Carer's Assistance, as part of the devolution of some social security payments to Scotland. The provision of unpaid care, and its interactions with social care, are closely interlinked with systemic and harmful gender roles that constrain women’s lives, with women’s access to paid work, leisure time and power remaining heavily constrained by the provision of care and gendered expectations around its value and delivery.

We also know that care - both paid and unpaid - is undervalued precisely because it is seen as 'women's work'. In preparing our response to the Scottish Government's consultation on Carer's Assistance, Engender spoke with women who provide unpaid care around Scotland. Their responses really highlighted why this is an issue of women’s equality:

“There’s a natural assumption that the female parent will assume the role.”

“I do have my brother around, but there was never even a question of him caring for them, (…) the daughter will do it, even though I'm the youngest and I'm a single parent, it'll be me.”

"It also has to do with pay. Because in a family group, men are likely to earn more than you. So it’s easier for a woman to give up work”

We even heard from a participant that when their male partner spoke to their employer about their new caring role, the employer responded with “Can your missus not do it?”.

We’re particularly taken aback by the, frankly insulting, proposal to extend a £10 per week payment to carers in Scotland who are caring for more than one person of any age who is getting a disability benefit. The proposed £10 per week for an additional 20 hours of care works out at a maximum rate of 50p per hour, or around a quarter of the current rate for Carer’s Allowance. This is a demeaning and damagingly low offer which exploits unpaid carers and serves to marginalise the lives of disabled and older people. It doesn’t reflect the care economy, and denies the reality that carers are undertaking skilled work that saves devolved services huge sums of money, and that caring for more than one person requires specific high levels of skill. 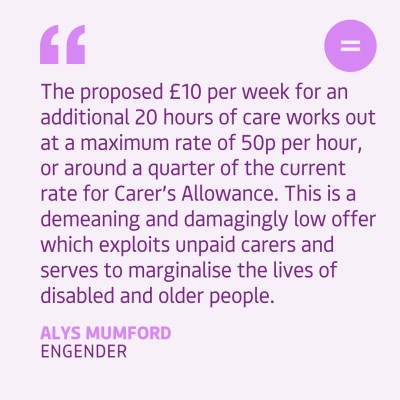 Women who took part in our focus groups told us:

“Shocking. Absolutely shocking. What does £10 a week buy you? Not a lot. And for caring for two people. Insulting, actually.”

“It feels as if the government think it’s ok for an unpaid carer to care for 55hrs per week as a minimum just to get that extra £10.”

“Not enough. An insult for the bulk of carers eligible who still provide significant care with no financial recompense.”

The types of care provided by women in Scotland can include the informal and entirely unrecognised support from older women, often grandmothers, in providing unpaid care; and the ‘sandwich’ caring that middle-aged women routinely provide in tandem for older relatives and children, which isn't currently recognised by the social security system. In our consultation response, therefore, we advocate for the broadest form of access possible to Carer's Assistance – including women with insecure immigration status, women who have recently moved to Scotland, and people in full-time education. Like all social security payments, we want anybody who needs it to be able to access Carer's Assistance, and we want recognition of the additional admin, emotional labour and stress which can come with unpaid care work. As one participant told us:

“I get fear every time a brown letter comes through the letterbox…is this going to be a reassessment? Am I going to lose everything?”

Therefore in our consultation response we welcome some of the proposals around making the system more compassionate and reflective of carer’s lives. Things like extending the timescale for carers to be able to apply for a redetermination, and continuing payments if the person being cared for enters hospital, are simple changes which will have a big impact on the wellbeing of carers.

You can read our full response here.