What do women want from local councils? 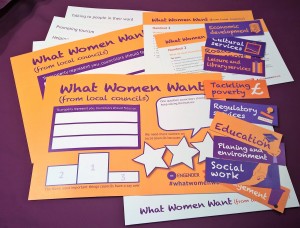 That’s the question that we, along with campaign group Women5050 want to answer this spring.

The decisions made by local councils have a significant impact on women’s lives, from allocating spending on education and leisure, to deciding how and where public transport runs. And yet it is in local councils that women’s underrepresentation is clearest – with only 24% of local councillors being women. Of the 1,223 local councillors in Scotland, only four are women from BME communities.

We've created activities and resources which can be used by groups across Scotland to explore what powers local councils have, and how women can have influence them. The workshops will be used to crowd-source 10 questions local councillor elected in May to ask themselves about how they are involving women in their work.

As well as hosting workshops, resources including fact sheets and activities will be available to anyone wanting to find out more about the local elections, and contribute to the questions to put to local councillors.

Following the elections, all local councillors will receive a mini-manifesto containing the 10 questions they should keep asking themselves to make sure they are representing all women.

“At election time politicians make a great show of wanting to listen to women, but unfortunately this is often seen as something which only needs to happen once every five years. By working with women around Scotland to ask what women need from local councils, we hope to be able to hold councillors to account about how they are representing the women in their wards.”

"Scotland has a dismal 24% of women councillors and only 4 of them are BME women. Councils make decisions about every aspect of our lives from our schools to our green spaces, it is high time that these decisions are made by a group more representative of society. Women 5050 and Engender are working together to make sure women's voices are heard in the upcoming council elections - we want women to be front and centre of this election, not just by turning up and voting but by being a core consideration in all policy making and budget decisions."

Engender and Women 5050 will be holding a public workshop on April 1st, as well as co-hosting workshops with Amina Muslim Women’s Resource Centre, Saheliya, the Dundee International Women’s Centre, the North West Women’s Centre and Inclusion Scotland in the run up to the elections on May 4th.

"With local government elections coming up on the 4th of May, we want to ensure Muslim and Minority Ethnic women are empowered and informed about why they should be voting and do exercise their right to vote, ensuring they are able to influence provision of a range of local public services"