Visibly Invisible: Our bodies, our voices, our rights 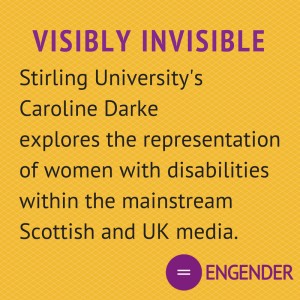 This is Caroline's fifth blog as part of this series. Read blogs one, two, three and four here.

For this final blog, I met with the Glasgow Women’s Group from People First: an advocacy organisation run by and for people with learning disabilities. I wanted to ask the women their opinion about some of the images I found during this research project and how these representations make them feel.

Initially, I had hoped to focus specifically on depictions of sexuality and motherhood in order to link more directly with Engender’s Disabled Women: Our Bodies, Our Rights project. However, given the time limitations of my project, the high sensitivity around these issues, and that fact that I was able to find so few positive images and stories relating to disability and female sexual identity and/or motherhood in the UK media[1], I decided to open the discussion up to also include mainstream representations of disability in relation to female body image and cultural stereotypes, as discussed in some of my previous blogs.

The group I interviewed comprised of seven women aged between 23 and 67. They had a variety of different needs, disabilities and life experiences and were supported at the meeting by People First support worker, Sandra Graham. All of the women interviewed have previously taken part in workshops with organisations like Values into Action and Zero Tolerance, on themes such as body-image, self-image and personal safety, so they were well-versed in thinking about issues around disability and representation. None of the women in the group were mothers themselves, though many talked with pride of their roles as step-grans, great-aunts and aunties.

Here are some of my key findings from the interview: 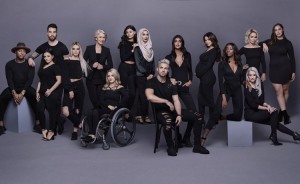 “I like this picture [the Loreal advert] because it promotes equality. It promotes people of different races. It promotes things across the scale, like disability and women who are pregnant, and it represents people working together, but someone with a learning disability is still missing.” - Rosie

“It’s good if they do things mixed, like with people with special needs and without special needs, so that it would show people that don’t have a disability how someone with a disability works around about it. It means that they can learn to understand us better instead of us being singled out and put into different groups. So they don’t judge you. So you’re not stereotyped” – Roxanne

“I love seeing people with a disability on the telly. I gives me such a buzz! It let’s people see that were not any different from anybody else” – Ellen

“It’s amazing. She’s all done up and she looks really nice. I think it’s brilliant” – Linda

“I think it’s great. I’d love to have been a model, because I love fashion, but it would not have been possible for me back then” - Margaret

Interestingly, the first thing the group talked about regarding the Alison Lapper documentary, was:

“There was one bit where the carer nearly got the wee boy took off her ‘cos she was making accusations. Oh, that pure got my back up! I was shouting and balling at the telly ‘cos that’s no right.” - Ellen

Unfortunately, this particular scenario clearly corresponds with one of the key findings of the Disabled Women: Our Bodies, Our Rights research so far, which evidences how much more likely it is for mothers with disabilities to have their children taken away from them by social services, or healthcare professionals, than non-disabled mothers/families[2]. It is therefore understandable that this would be a topic that would resonate most strongly with the group. In fact, one of the other members said that the main reason she had not had children herself was because she was afraid that any child she had would be taken away from her, just like she was taken away from her own mum.

At the end of the session, I asked the group if they would be able to draw me a picture of how they would most like to be seen or represented themselves. Not all of the group contributed to this activity, but I think Rosie’s drawing says it all… 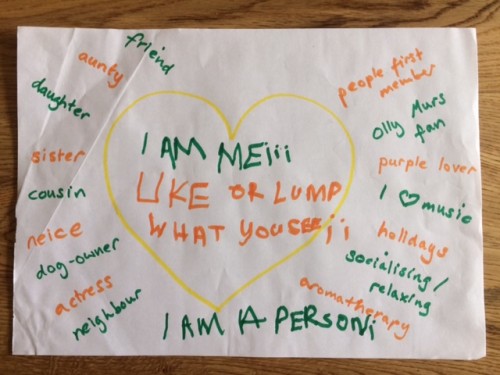 I would like to say a huge thank you to Sandra Graham and all the women from the People’s First Women’s Group for enabling this interview to take place; for giving me their time and for sharing their thoughts, opinions and personal experiences with me. The encounter has been of immense value to my research and I hope that your words will help positively influence how women with disabilities are perceived and represented in future UK press and media.

[1] I found only one article within my Nexis search: Chan, E (20 March 2018) Disabled mother-of-three who lost her left hand in a horrific house fire as a baby finally achieves her dream of becoming a model after facing years of abuse from strangers, Mail Online, Femail section, and only three additional examples in other media: Alison Lapper in Child of Our Time (BBC1, 2000- now), The Woman with the Remarkable Body (Channel 5, 2005)and Equally Different (A campaign by Equality and Human Rights Commission, 2015), Anne Wafula Strike and Tanni Grey-Thompson