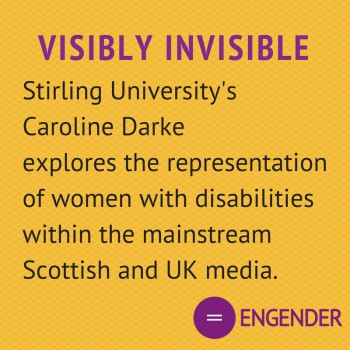 This is Caroline's fourth blog as part of this series. Read blogs one, two, and three here.

Garnering numerous awards and reaching audiences of nearly 40 million, there is no doubt that Channel 4’s ‘Meet the Superhumans’ campaign for the London 2012 Paralympics fundamentally changed the way that physical disability is represented within the UK mainstream media. But is this narrative and legacy always as useful to the ‘cause’ as it portents to be? Is there another agenda at play here and what effect might this be having on the lives of disabled people in the UK? 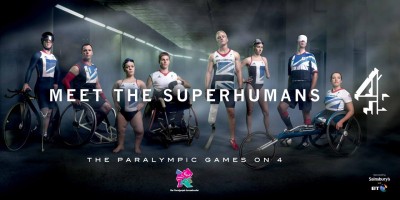 Don’t get me wrong, there are, of course, many positive aspects to the ‘superhuman’ mythology: it represents disabled people as strong, determined and driven individuals; it provides much needed heroes and role-models for both males and females living with disability; it presents positively different ‘healthy’ body-types for mass consumption; and, most importantly, it challenges public perceptions and assumptions of what people with disabilities are capable of (Ellis, 2015). However, it also constructs its own very particular aesthetic of ‘acceptable’ disability (Garland-Thomson, 2002, Hall, 2011), and masks, or even ignores, many of the harsh realities and obstacles that people living with a disability still face today.

For one, although it celebrates ‘triumph’ and achievement, to me, Paralympic sport remains a source of social segregation rather than integration. It uses the medical/individual model of ‘otherness’ to categorise athletes into sub-groups, and disabled people (predominantly) do not compete alongside their able-bodied compatriots. One exception to this rule occurred in 2012 when Oscar Pistorius took part in the Olympic 400m. This event caused huge controversy within the sporting world, with some athletes complaining that Pistorius’s disability gave him an unfair advantage because of the technological superiority of his prosthetic limbs over their human ones – a somewhat ironic state of affairs given that we are the supposedly ‘dis’abled.

Two, the technology and training required to compete at an elite Paralympic level often comes at a high financial cost. For many disabled people (who are more likely than non-disabled to live below the poverty line) this lifestyle is simply not an option, for they do not have the funds required to take up disability sport and maintain the life of a professional athlete. This supposedly liberating opportunity is therefore only available to the those of a certain class, reiterating the lack of acknowledgement of the multiple oppressions often faced by people with disabilities, as mentioned in my previous blogs.

Three, what if sport is not your thing, or the nature of your disability will always preclude you from achieving this modern, alternative, Adonis body-type? Where are your heroes then, as seen on TV or in the mainstream press? (Ellis, 2015) And isn’t it interesting that, despite operating since 1968, no-one has ever chosen to cover the Special Olympics (for people with intellectual disabilities) in the same slick, multi-million pound, ‘superhuman’ way? (Carter and Williams, 2012)

However, my main problem with the “supercrip” mythology (Clogston, 1994) is that it deliberately glosses over the fact that living with a disability is hard. It presents an unrealistic, often unattainable, and sometimes not even desired, portrait of disabled life (see artist Katherine Araniello’s hilarious parodies of the London 2012 campaign for an alternative take on the Superhuman message). For, in reality, living with a disability will always present additional challenges and I can safely say that, in my experience, being disabled is definitely more physically, emotionally, psychologically and socially demanding than being able-bodied ever was. But nobody wants to talk about this. It’s not sexy or inspiring. No advertising company wants to promote pain or difficulty or struggle, unless it ends in ‘overcoming’ these (daily) obstacles, or pretending they do not exist. The mainstream media can only really cope with disability if it means that they can sell you more stuff (Ellis, 2015) and promote the idea that if, heaven forbid, you (the able-bodied) end up disabled some day, there still will be something worth living for (Hall, 2011, Ellis, 2015) i.e. the chance to triumph ‘despite’ your disability, and to become a source of ‘inspiration’ to others. However, in the words of Stella Young “We’re not here for your inspiration”, most of us are simply trying to get on with living the best life we can, just like you.