Using the law to tackle misogyny

Engender’s Policy and Parliamentary Manager, Eilidh Dickson, has been a member of the Independent Working Group on Misogyny chaired by Baroness Helena Kennedy. Here she reflects on the final report released today: 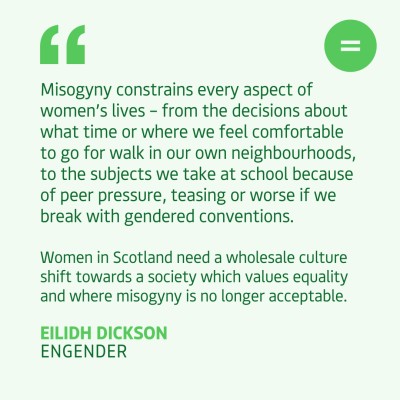 Misogyny constrains every aspect of women’s lives – from the decisions about what time or where we feel comfortable to go for walk in our own neighbourhoods, to the subjects we take at school because of peer pressure, teasing or worse if we break with gendered conventions. Women in Scotland need a wholesale culture shift towards a society which values equality and where misogyny is no longer acceptable. For a number of years Engender has been calling for a standalone criminal offence based on misogyny; using the law as one piece of the puzzle to making women safer in Scotland.

Conversations about this are not new, and the working group that is releasing its report today is the result of long debate over Hate Crime legislation, and whether or not this was the best place for legislation to tackle misogyny to sit. During those discussions, Engender and other women’s organisations argued against simply adding sex and gender to existing hate crime laws. Women are in a unique position as a majority population who are oppressed by a minority and where violence and the threat of it is intimately connected to maintaining the dominance of men, in public and private settings. Additionally, international experience has shown that a hate crime framework not only isn’t effective against misogyny, but can also actively work against existing legislation around violence against women.

Therefore we’re really pleased that the group was formed, and that we were able to join with experts in law, social work and human rights to take the necessary time to grapple with the huge question of how the law can be used to interrupt misogynistic attitudes and behaviours. In doing so, we heard from experts from around the UK and internationally and directly from women to map conduct we all routinely experience and responses. The report presented today by Baroness Kennedy reflects much of our perspective on the deeply ingrained and normalised misogynistic attitudes and behaviours that are based on entitlement to women, their bodies, attention and capabilities and recommends a holistic approach.

Here I’m going to set out some elements of the report which should be particularly welcome to anyone concerned with ending misogyny in Scotland.

What’s in a definition?

Misogyny is a way of thinking that upholds the primary status of men and a sense of male entitlement, while subordinating women and limiting their power and freedom. Conduct based on this thinking can include a range of abusive and controlling behaviours including rape, sexual offences, harassment and bullying, and domestic abuse.

The report goes into some depth about how this eventual recommendation of misogyny was reached the by the group, and why it was important to be an intentionally non-legal definition. It reflects the way most women in Scotland experience misogyny – through attitudes, and through behaviour as we describe in our 2019 report Making Women Safer in Scotland. By starting with this non-legal definition we were able to consider which attitudes and behaviours we considered to fall within a spectrum of misogynistic conducts before we assessed what law could do.

Neutrality in the face of inequality

One of our key concerns with discussions around hate crime was that it completely ignores the fact that women are currently not equal in Scotland – culturally, financially, and in law. The proposed Act and recommendation in the report are deliberately not gender-neutral. As Baroness Kennedy says in her report: “Treating as equal those who are not yet equal only furthers inequality.”

How do we deal with men who are not only misogynistic in their own conduct, but advise, support and in some cases ‘teach’ other men to behave in the same way? The recent focus on incel culture (Access a webinar and podcast we recorded with Laura Bates on this last year) shows us that there is a need for the law to reflect the reality that the stirring up of hatred against women has a negative, sometimes deadly, impact on women.

One thing that has become clear over the past years is that the law is not keeping up with our online world. Stalking can now include social media tracking, threats of rape can appear on your phone in the middle of a working day at significant scale, and the new language of the internet means that previous understandings of what constitutes violence are no longer appropriate. The report released today recognises this, and attempts to concentrate on behaviours that occur both online and offline. Understanding how misogyny is used to police the internet and the impacts of women’s restricting their use of the internet in response requires us to think about more modern approaches to what constitutes harassment and harm.

A holistic and joined-up approach

The law cannot provide all of the answers to misogyny. Women’s distrust of the justice system is at an all-time low - quite understandably given low conviction rates for rape and sexual assault and cases such as the murder of Sarah Everard by a serving police officer. The report is clear that we are not looking for carceral solutions to misogyny, but that law is a tool to communicate society’s values while also delivering justice for women. Tackling misogyny requires legislation change alongside actions to challenge institutional sexism at all levels of the justice system, providing training and exploring innovative reporting systems, and sending a clear message to men and boys as well as to women and girls that ending misogyny is a priority for the Scottish Government. That’s one of the reasons it’s so important that any new Act is drafted to sit withinEqually Safe, Scotland’s world-leading strategy for ending violence against women and girls, so that the law is not acting to end misogyny with one hand, while unintentionally undermining this with the other.

You can access the full report here, and there will be much more to say as we, hopefully, see the Scottish Government accept these recommendations and work to implement a Misogyny and Criminal Justice Act.