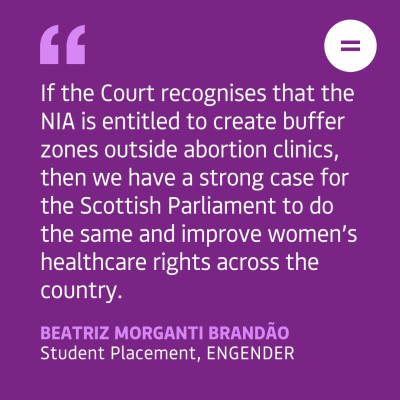 We're pleased to be working with student Beatriz Morganti Brandão‎ to research how the International Covenant on Economic, Social and Cultural Rights can be used to protect women in Scotland. In this blog post, she explores the upcoming UK Supreme Court decision on buffer zones in Northern Ireland and how it could impact on women’s rights in Scotland.

A hot topic in Scotland today is the regulation of ‘buffer zones’ (protest-free areas) outside abortion clinics. These zones aim to protect women seeking and providing abortion services from escalating harassment and intimidation by anti-choice protestors. Gillian Mackay MSP has recently launched a consultation on a project to legislate on buffer zones around clinics in Scotland. The consultation is open until 11th August and we encourage all those wishing to improve women’s rights in Scotland to contribute. You can fill in the consultation online here.

This comes in a context where the Scottish Government has committed to preventing harassment against women seeking abortion services, and countries like Canada, Australia and Spain have already adopted laws creating buffer zones and seen concrete effects in terms of reducing harassment and intimidation.

Following this trend, earlier this year, the Northern Ireland Assembly (NIA) emblematically passed the Abortion Services (Safe Access Zones) Bill, which criminalises acts outside clinics that have the intent or effect of influencing those seeking and providing abortion services.

However, a few months later, before the Bill came into effect, the Office of the Attorney General for Northern Ireland referred it to the UK Supreme Court to determine whether it exceeds the NIA’s legislative competence for allegedly interfering with protestors’ rights to peaceful assembly and freedom of expression. According to the Attorney General, the 1998 Northern Ireland Act (through which the UK Government devolved certain legislative powers to the NIA) establishes that a law is outside the NIA’s competence when incompatible with the rights protected by the European Convention of Human Rights - which includes the rights to peaceful assembly and freedom of expression.

Therefore, the case is essentially a matter of balancing rights. On the one hand, women and girls have the rights to access sexual and reproductive healthcare safely and to non-discrimination. On the other, protestors have the rights to peaceful assembly and freedom of expression. The point here is that protestors’ rights are not absolute and can be lawfully limited, under international human rights framework, to ensure that women can access clinics and abortion services without being harassed, and protestors can continue to express their opinion – just not outside abortion clinics.

We hope that the Supreme Court will acknowledge this following the hearings that will take place next week on 19th July, and confirm the NIA’s competence to pass the Bill. This outcome would directly impact Scotland’s project to adopt national legislation on buffer zones, as we have a similar framework to Northern Ireland’s in terms of what the Scottish Parliament can legislate on (see the 1998 Scotland Act). If the Court recognises that the NIA is entitled to create buffer zones outside abortion clinics, then we have a strong case for the Scottish Parliament to do the same and improve women’s healthcare rights across the country.

Women’s rights activists and civil society now have a key role to play. We must spread the word about what is going on and how this affects women’s lives and choices, and contribute to the consultation process in Scotland.

If you'd like to find out more about what the introduction of buffer zones might mean for abortion rights, and how to have your say in the consultation, we're joining with the Back Off Scotland campaign to host a webinar on 25th July from 6-7pm - you can find out more and book your free place online here.