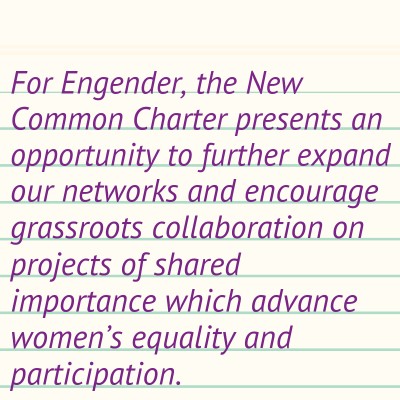 Since spring this year, Engender has been involved in the 'Towards a New Common Chapter' project coordinated by the Centre for Cross Border Studies. Here, our policy and parliamentary manager Eilidh Dickson looks at our international work and our work on the project so far.

Engender’s work across the UK, Europe and internationally is a vitally important aspect of the feminist policy and advocacy work that we do.

Progressing women’s rights and equality in Scotland often depends on the learning and experience we can gather from our sisters across the women’s sector, both nationally and through international networks such as the UK Joint Committee on Women and the European Women’s Lobby (EWL), the largest umbrella body of feminist organisations in Europe. So often, challenging the root causes of gender inequality demands the same or similar actions wherever we are, and being able to rely on and show solidarity as women’s organisations is crucial in amplifying our work.

We’ve spoken before about some of the networks we use to do this, from our involvement with the EWL to our work on CEDAW, and we continue to engage in these ways. Additionally, for the past few months, we’ve been engaged with third sector organisations around Brexit. Brexit poses a huge and serious challenge for women in Scotland, the UK and Europe. Gender equality is a fundamental value of the European Union; the principle of equality between women and men is enshrined in the Treaty on the European Union, the Treaty on the functioning of the European Union and the Charter of Fundamental Rights, and is also confirmed throughout EU law.

The EU has been an instrumental actor in the development of legal rights which directly improve women’s lives, including non-discrimination, employment and equality protections; has driven the expansion of gender mainstreaming into UK and Scottish policy, and has promoted cooperation across justice and security which has facilitated efforts to combat violence against women.

However the UK relationship with the EU changes over the coming weeks, we remain totally completely committed to our ongoing alliances with women’s organisations across Europe, whether we’re sharing knowledge or campaigning together. 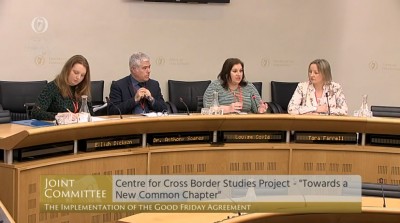 One other way we’re doing this is through the Centre for Cross Border Studies’ project ‘Towards a New Common Chapter.’ The Common Charter takes its name from a high-level policy framework - the Common Chapter - included in Ireland’s National Development Plan and Northern Ireland’s Structural Funds Plan (2000-2006). However, the new version is exclusively focused on the views of civil society. The project initially brought together representatives from across the third sector on the island of Ireland to look at a new framework for cross border working. While Brexit has added a new lens to this work, the project predates the 2016 referendum, and subsequent phases of the project have brought insight from organisations in Scotland, Wales and England.

While the organisations involved are not limited to women’s organisations, this has been a key focus of the project, and has led to the inclusion of measures such as gender budgeting, steps to improve women’s representation and the need for high-quality childcare and social care support.

Through our links to women’s organisations in Northern Ireland, this past we were asked to host a group of women’s organisations in Glasgow to offer a Scottish take on the draft charter, and then to attend a day’s feedback group in Belfast alongside other stakeholders. We’ve also presented the Charter and the importance of cross border working for the women’s sector to representatives in the Irish and UK parliaments. This week participants from the Republic of Ireland and Northern Ireland will be in Edinburgh to meet with representatives from other civil society organisations, to build support for the Charter’s framework and the need for persistent networks and projects across organisations in Ireland and the four parts of the UK.

For Engender, the New Common Charter presents an opportunity to further expand our networks and encourage grassroots collaboration on projects of shared importance which advance women’s equality and participation. The past few months have introduced us to new organisations and individuals, from the women’s sector and elsewhere, that share our concerns and ambitions, as well as creating new spaces for conversations.

You can find out more about the 'Towards a New Common Chapter' project and the Centre for Cross Border Studies here. The text of the New Common Charter is available online here.