This article first appeared in The National on May 26th 2015.

There's a strange tension at the heart of sectarianism in Scotland, in that we talk about it a great deal but actually know very little about it. It appears to sit at a particularly slippery intersection between race and sect, and takes on a different shape across geographical areas and class identities. Surprisingly, we have only had even a tentative definition for sectarianism in Scotland since 2013. This lack of clarity about what sectarianism is and how it functions to marginalise, exclude, and discriminate against individuals only becomes fuzzier when we throw gender into the mix. 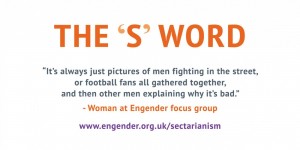 It is definitely a challenge to bring women into the discussion about sectarianism in Scotland. Sectarianism is framed as taking place within male-dominated spheres such as football and marching organisations. This idea that it is mostly “men behaving badly” means women can take time to put their finger on the distinctive ways it affects them.

Engender’s work over the last 18 months has involved exploring the question of what sectarianism means to women, and how they act and are acted upon within that context. We created spaces across Scotland where women could come together to talk about sectarianism, and its impact on them and their lives. Today we launch a report that brings together women’s voices on how it plays out in their families and communities, with ideas for action to tackle it.

Some of our findings are good news. Across all of the sessions, women felt that sectarian behaviours in Scotland were become less acceptable. However, there was a strong sense that such attitudes lingered on within some communities and that these had a significant impact. 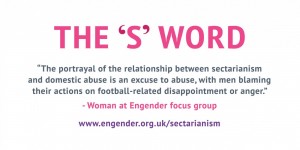 Although women who attended our sessions were very critical of the notion that sectarianism was anything more than a poor excuse for domestic abuse, the notion of the “mixed marriage” between Catholics and Protestants lives on. With it a whole set of demands, from the mundane to the diplomatic, are made of women. Many of these are wrapped around assumptions of what women’s roles in families should be: the mother who must remember not to buy a blue toothbrush for her children; the wife expected to find a low-cost car that is not green; the bride who must find a way to include new relatives in her wedding when they will not set foot in a chapel.

Women talked too about the overlap between the “toxic masculinity” that clings on to football culture, and their experience of street harassment. Many women avoid public transport and going into the city centre on big match days. Although women’s inequality, and not sectarianism, underlies street harassment, women were of the view that the sectarian-inflected “men behaving badly” narrative around the Old Firm gave men permission to shout at, grab, and touch them inappropriately. 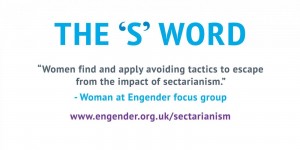 Many women undoubtedly replicate sectarianism in their families, and choose to teach their children songs that are now considered to be inappropriate or offensive, or guard the boundaries of divisions that are based on history and identity. For other women, the task of challenging relatives is made more difficult by the lingering notion that men are the heads of families, and make the decisions about how their families will be.

The women who attended our sessions felt very strongly that they had been largely excluded from the process of finding solutions. There is a real concern that the organisations tasked with working at community level to tackle sectarianism are male-dominated.

We have made a number of recommendations, which draw on those created directly by women across Scotland. We have specific suggestions on building women’s capacity to challenge family members; bringing communities together to work to end division; methods for encouraging men to challenge each other’s behaviour safely; things to think about in designing anti-sectarianism funding programmes; and how public bodies should use existing equalities regulation to change their practice.

We are encouraged by the idea that sectarianism’s grip on communities and individuals in Scotland is lessening. By bringing women’s insights into the mix, we hope to help give it one last shove out of the door.

Find out more about Engender's work on Sectarianism.