In this blog post, Gender Equal Media Scotland's Development Officer, Dr. Miranda Barty-Taylor, discusses the language used by institutions in the wake of the Sarah Everard case and trial, and the epidemic of violence against women and girls in the UK. This blog entry largely refers to UK institutions. 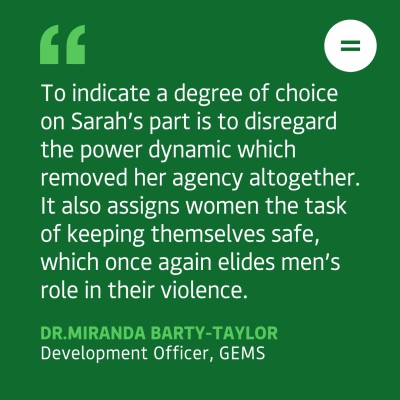 I am grappling with my unproductivity, as my concentration veers from a report on gender equality in the media to the horrifying details emerging from the trial of Sarah Everard’s killer. I suppose it is little wonder; while half my brain analyses the discourses being reproduced in the inevitable public discussion of the trial, the other half is reeling from the fear she must have felt. Just as I deconstruct the ideologies behind the Met’s next statement, I feel again an incandescence of anger that is too bright to bear. The language coming from sites of political and police power is so very problematic, reinforcing misogynistic norms and neglecting to acknowledge the crisis of men’s violence against women.

Violence against women and girls is an epidemic in the UK, reports Her Majesty’s Inspectorate of Constabulary and Fire and Rescue Services (HMICFRS). In March Johnson made a statement about the Safer Streets fund, which the Government doubled to £45 million, to be spend on streetlights and CCTV. The language he uses about violence against women and girls is revealing: we need to “better protect and defend them.” This construction positions women and girls as dependent and weak, requiring the strength of male-dominated institutions such as the criminal justice system to look after their interests. Framed in such a way, more streetlights might make sense. However, it is far removed from the “radical and bold” action called for by the HMICFRS. Meanwhile the cuts to 60% of local authority domestic abuse refuges further underline the lack of political will to fund existing women’s services on the front line of men’s violence.

The apathy of those in power is astounding. There is a mountain of evidence from third sector and specifically women’s organisations (Zero Tolerance, Rape Crisis Scotland, Scottish Women's Aid) about the systemic issues and structural solutions needed to combat men’s violence and uphold women’s human rights. Instead the UK government’s Tackling violence against women and girls strategy paper lists communication campaigns and tools for reporting unsafe areas as “innovative crime prevention measures to ensure women and girls feel safe in public spaces.” Here, by highlighting feelings of unsafety, the actuality of violence against women and girls is backgrounded. Women’s emotions have long been coded as signs of weakness and hysteria, and used to gaslight us, minimising and dismissing our lived experiences. Yet as Sandy Brindley from Rape Crisis Scotland writes this week: “The horrific details that have emerged this week at the sentencing have brought into sharp reality that the fear we are raised to feel, though far from healthy, is legitimate.”

Meanwhile statements from police officers and the Met are equally confounding and short-sighted. While Met Police Commissioner Cressida Dick stated that officers had been outraged at the actions of their colleague, Lord Justice Fulford confirmed that some officers had “spoken supportively” of him during the sentencing hearing. Senior investigator Simon Harding said that “Police officers do not view Wayne Couzens as a police officer — they view him as a murderer who happened to be a police officer.” The issue here of course, is that naturally Sarah did ‘view’ him as a police officer – because he was one. In focusing on his identity as a murderer, not an officer, Harding slips past the employment responsibilities of the police force, as well as the institution’s legacy of abuse of power. The officers’ perception of their colleague is frankly immaterial; the questions needing answered are those of accountability for him remaining on the force to begin with.

Similarly, news which refers to a ‘pretence’, a ‘faked arrest’ or a ‘luring into the car’ dangerously rewrites the scenario as one of dishonesty. While a deception did take place (of motive), the officer in question used police apparatus to authenticate his position and legitimate her arrest. To imply otherwise is to discount his state-mandated authority, marking his actions as those of an individual ‘monster’ as opposed to symptomatic of an institution steeped in patriarchy and white supremacy.

Importantly, this false narrative of ‘pretence’ also connotes that had Sarah been able to discern the charade, she might have lived. This is powerfully damaging, albeit inadvertently. Sarah did exactly as she had been taught to do, as we have all been taught to do. Why should she have done otherwise? Two witnesses to the arrest believed she “must have done something wrong.” There was no charade, and language suggesting otherwise contributes to a narrative that, in some small way, Sarah was at fault for not detecting it.

Indeed North Yorkshire Commissioner Philip Allott has in fact stated this explicitly: “she never should have submitted” to the arrest. Meanwhile the Met have also released a statement with advice for those being arrested by plainclothes police officers to verify their identity: “If a person still does not feel safe, the force said they should consider “shouting out to a passerby, running into a house, knocking on a door, waving a bus down or, if you are in the position to do so, calling 999.”” This narrative inherently queries Sarah’s decision to submit to arrest. To indicate a degree of choice on Sarah’s part is to disregard the power dynamic which removed her agency altogether. It also assigns women the task of keeping themselves safe, which once again elides men’s role in their violence. Further, at a time when police brutality against people of colour is increasingly in the spotlight it is incredible that such advice is deemed appropriate.

And all the while, as women’s fears are relentlessly dismissed, our lived reality of endemic violence ignored, our mourning sisters arrested by the same force in which Sarah’s killer thrived, the world keeps turning. Impossibly, there are emails to send, and reports to write. The personal is political, the political personal, and as I muster every ounce of will to detach myself and bring clarity of thought, still my heart writhes at her suffering, and that of Sabina Nessa, Julia James, Nicole Smallman, Bibaa Henry, the 80 women killed by men since Sarah’s death, and the suffering of those they have left behind. Their pain is our pain. And until decision-makers in power bring bold action to disrupt violence against women, we will continue to stand under all the streetlights, raising our voices on their behalf.

If you need to talk, Rape Crisis Scotland's helpline is open everyday from 6pm - midnight: