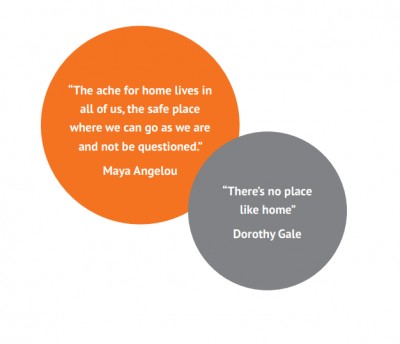 Housing and homelessness policy in Scotland is ignoring the specific experiences and needs of women according to a new report from Engender. Their research found that, despite both international human rights obligations and the Scottish Government’s own commitment to housing rights, half of the population is almost entirely absent from any briefings, research, and action plans.

The report highlights that while women in Scotland make up the majority of lone parents and carers, are far more likely to be living in poverty, and spend a far higher proportion of their income on accommodation than men, they are not represented in the discourse around housing. Homelessness, too, is repeatedly seen as a problem predominantly affecting men, despite the fact women’s homelessness simply looks different to men’s – rough-sleeping in less busy areas for safety, hiding their homelessness for fear of losing children, and (re)entering abusive housing situations. 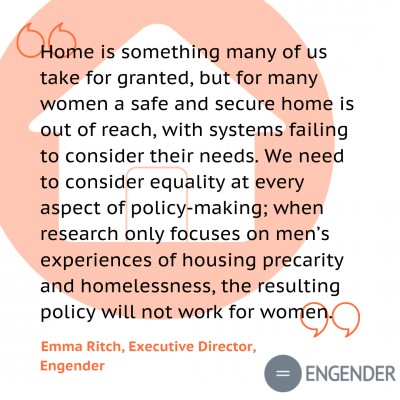 “Home is something many of us take for granted, but for many women a safe and secure home is out of reach, with systems failing to consider their needs. This report shows the need to consider equality at every aspect of policy-making; when research only focuses on men’s experiences of housing precarity and homelessness, the resulting policy will not work for women.

While there is rightly concern about the numbers children living without safe and secure homes, too often these figures fail to take into account that behind child poverty, there is most often women’s poverty as well. Homeless people in Scotland are already made to feel invisible, and the lack of gendered policy means that for women without secure housing, this is invisibility squared.

We’re pleased that the Scottish Government has already made moves to redress the gender imbalance at the heart of housing policy, but much more needs to be done to ensure that women’s lives are no longer ignored. ”

Domestic abuse has been found to be a major cause of homelessness for women in Scotland, with women forced to make an impossible choice between abuse and leaving their home. 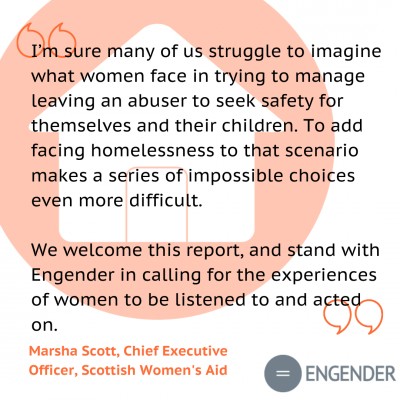 “I’m sure many of us struggle to imagine what women face in trying to manage leaving an abuser to seek safety for themselves and their children. To add facing homelessness to that scenario makes a series of impossible choices even more difficult.

“A lack of gendered policy means that the existing inequalities experienced by women are repeated and reinforced, with a huge impact on their finances, health and wellbeing. Unless housing and homelessness policy is gendered, we are never going to develop responses that afford women and children safety, hold perpetrators to account and respond appropriately to domestic abuse.

“We welcome this report, and stand with Engender in calling for the experiences of women to be listened to and acted on.”

The report calls for a range of actions to ensure that women are no longer ignored in Scotland’s housing system.