The Abortion Act: 50 years on

Today marks 50 years since the 1967 Abortion Act, which allowed women to access abortion in certain circumstances. While the act was undoubtedly a key moment in the history of women’s rights, and helped end fatal backstreet abortions, it is underpinned by outdated beliefs that reproductive choice should sit with the state. Under the act, abortion must be administered in an approved medical facility (more on that below), must be within the first 24 weeks of a pregnancy, and must be approved by two doctors – the most paternalistic aspect of abortion law, and one which undermines women’s autonomy and decision-making about her own body and life choices.

The 1967 act was intended as an interim measure, and has never been seen as ideal by either pro-choice or anti-choice activists. Both fear losing ground on the issue of reproductive rights by opening up the act for debate, so despite the fact that the UK Parliament reguarly sees attempts at discussion on abortion (the majority of which are attempts to further restrict our already limited right to abortion), the 1967 act remains unchanged, a seeming mid-point in discussions. 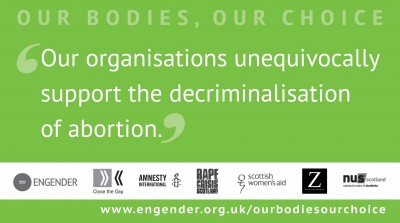 50 years is a long time for legislation to stay untouched, and it is clear that the Abortion Act is creaking at the seams. Since the Scotland Act 2016 saw abortion law devolved to Scotland, Engender has been working with women’s, equalities and human rights organisations to push for a much-needed shift to modern legislation and healthcare practices. And we have seen the first steps towards this, suggesting that progress is possible.

Firstly, the news earlier this year that women from Northern Ireland will be able to access abortion in England, Scotland and Wales. While this can only ever be a sticking plaster to the problem of women’s inequality in Northern Ireland, and there are still huge questions to be answered about how this will work in practice – will travel and accommodation costs be covered, as they will in England for women on low incomes? Will women’s anonymity be preserved? Will abortions in Scotland require two separate visits? - it is clearly a step forward.

And just this week we heard the news that in Scotland women will for the first time be able to take misoprostol at home. Misoprostol is the second of two drugs administered during a medical abortion and previously, under the terms of the 1967 act, had to be taken in an approved health facility which didn’t include the home. The announcement from the Scottish Government means that women can take the drug at home within the first ten weeks of pregnancy. It means that women from Scotland will no longer have to face the indignity and stress of going through an abortion while travelling home from a clinic, and it brings Scotland in line with good practice and medical evidence.

Both of these advances are simply tweaks to a system which needs an overhaul, but they represent significant practical changes which will have a very real impact on women’s lives. And, like the creation of the 1967 act itself, they are a testament to the women and women’s organisations across the UK who have not given up the fight for women’s reproductive rights. There is still much to do, but we can be hopeful about the opportunities for change.

Read our report on the case for a Scottish approach to abortion, and our international comparison of abortion law.