Guest Post: Why the dialogue on street harassment needs to remain open

Lindsay Linning is a MSc student at Edinburgh University in Sociology and is currently preparing her dissertation on gender-based street harassment, as well as working in conjunction with Hollaback! Edinburgh. Here she writes on her experiences of street harassment and the results of a recent Hollaback! survey. 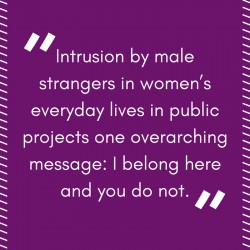 Maybe it was that time the guys in Toulouse packed into their car roared at me that I was a whore, following me, repeating that insult, whore, whore, whore. I broke down to a group of workmen nearby – “Vous entendez ce qu’ils me disent?!” – “Do you hear what they’re saying to me?!” – I was met with blank stares, an awkward look or two. By the evening, I’d put it out of my mind. Boys will be boys, I was told.

Or maybe it was that time the guy grabbed me in the bar, pushed up against me, viciously. Or the time the guy followed me relentlessly for several hours on his bike on a baking summer’s day. Or was it that night by my halls in Glasgow, alone, when the guy purred up in his car, rolled down the window and detailed what he wanted to do to me? Shouldn’t have been walking there alone. Especially not at night, I am told.

The accounts above are my answers to the question ‘What was your worst experience of street harassment?’ Am I able to put these experiences into a hierarchy of the trauma they have caused? How do you measure the impact of such events when they become the fabric of everyday life as a female? And, perhaps what I have struggled with most, how do you articulate street harassment when so many doubt the veracity of your claims and indeed argue it is merely part and parcel of the experience of being a woman?

Results of a survey carried out by Hollaback! Edinburgh this month details the most commonly used adjectives by respondents to describe their feelings at the time of being harassed in Edinburgh: angry, uncomfortable, scared, unsafe. Yet they tell us to ‘smile, love!’ or to take it as a compliment. But why should we? and how can we when harassment forms part of a continuum of violence, with the victim never knowing if and when it may escalate into something more sinister? Intrusion by male strangers in women’s everyday lives in public projects one overarching message: I belong here and you do not. It is a reminder that public space is still, to our disdain, very much a man’s world.

Perhaps what is most troubling about the phenomenon of street harassment is that it takes just one incident to leave an indelible mark upon the victim. This mark can take many forms: maybe she decides to never wear that dress again (jeans will attract less attention), starts to avert her eyes when going about her daily life (that way I’m not asking for trouble), or decides to stop running outdoors (men love a lycra-clad bum). Maybe she simply feels a deep sense of unease when out and about. Harm manifests itself in a multitude of forms. And at the heart of all this is that these strategies we take as women – to protect ourselves, to prevent ourselves from falling into harm’s way, to essentially try to live a safe life in public – take up our time. They take up our energy – energy that could be better invested into something bigger and better. Both consciously and subconsciously as women we are constantly monitoring ourselves and our surroundings, and we are conditioned into a state of alertness. 22 per cent of the Hollaback! survey respondents cited avoiding eye contact as their harassment management strategy. 17 per cent stated they avoid going out at certain times. 16 per cent avoid certain places. It shouldn’t be this way.

The dialogue on street harassment needs to remain open. To tackle this pervasive problem rife on streets across the world we need to keep talking about it. We need to see a cultural shift in society’s acceptance of street harassment, and for this to happen we need stories to be told. I’ve been met with many an incredulous look or startled expression of disbelief when I have recounted the stories I opened this piece with above. They might make people uncomfortable, laugh awkwardly or defensive, but every reaction has its own value. Because it’s not ‘just a compliment’ or a question of ‘taking a joke’. It’s a matter of not just wanting but needing to be entitled to live our lives as equals out in the world.