Tackling sexual and sexist harassment in the workplace

Engender is working to explore how we can prevent sexual and sexist harassment in the workplace and improve outcomes for victim-survivors as part of a project funded by grant-making charity Rosa. Here, our Policy Officer Mariah Kelly gives an overview of the scale of the issue and the work of the project: 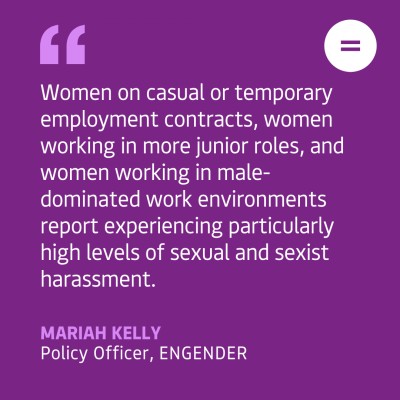 Experiences of sexual and sexist harassment are pervasive for women in Scotland and beyond. The #MeToo movement has led to long-overdue public attention onto just how ubiquitous these experiences are for women, and a recent survey highlighted that 86% of young women in the UK have experienced sexual harassment.[1]

Engender have been awarded funding from Rosa, as part of a broader funding stream on #TimesUp, to look with fresh eyes at how Scotland might act to prevent sexual and sexist harassment and improve outcomes for victim-survivors who have experienced or are experiencing it. Rosa is also funding separate and distinct projects on sexual harassment, which are being conducted by women's organisations across the UK including Close the Gap, the Scottish Women's Rights Centre, Fawcett Society, Chwarae Teg and the Women’s Resource and Development Agency.

What is sexual harassment?

Sexual harassment is a form of men’s violence against women and is both caused by and contributes to women’s wider inequality. It is broadly defined as unwanted conduct of a sexual nature, and includes a broad range of behaviours such as unwelcome touching, making sexually embarrassing ‘jokes’, or unwanted verbal or physical advances.[2]

Sexist harassment, another term often used in this context, is closely related and often underpins sexual harassment. This refers to the non-sexual but sexist and misogynistic behaviours that many women face on a daily basis. For example, sexist attitudes, norms and stereotypes lead to women often being assigned different tasks from their male colleagues at work, being spoken over in meetings, or subjected to gendered comments about their appearance.

The scale of the problem

Research from the Trade Union Congress found that more than half of women in the UK, and nearly two-thirds of women aged 18-24 years old, reported experiencing sexual harassment at work.[3] This has serious psychological and professional impacts on victim-survivors, as well as harming women’s employment prospects and contributing to the gender pay gap.

Women on casual or temporary employment contracts, women working in more junior roles, and women working in male-dominated work environments report experiencing particularly high levels of sexual and sexist harassment. Harassment also intersects with other structural social inequalities, such as race and ethnicity, disability, sexual orientation and gender identity to influence who is targeted and the nature of harassment. These power inequalities explain why women of colour, disabled women and LGBT women experience higher levels of sexual harassment and why wealthy, white men so frequently avoid any repercussions for their behaviours.

There are critical challenges to tackling sexual harassment in workplaces. Women across economic sectors and types of institution describe a lack of confidence in their employer to appropriately prevent, investigate, and sanction individuals responsible for sexual harassment. This, in addition to the normalisation of sexual and sexist harassment, are key to understanding why four out of five women who experience sexual harassment do not report this to their employers.[4]

Where harassment is reported, employer’s actions are frequently inadequate or even harmful and many women feel they are not taken seriously. 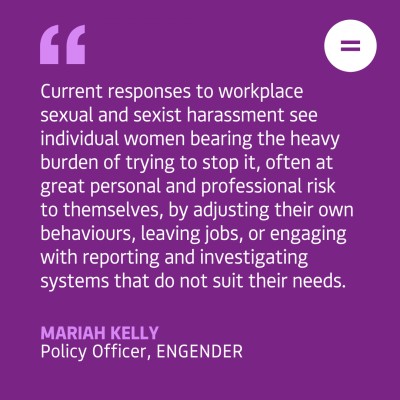 Current responses to workplace sexual and sexist harassment see individual women bearing the heavy burden of trying to stop it, often at great personal and professional risk to themselves, by adjusting their own behaviours, leaving jobs, or engaging with reporting and investigating systems that do not suit their needs. This project seeks to rebalance this risk away from individual women and identify structural changes to make workplaces safer and more equitable.

One way in which we are doing this is by convening an Expert Working Group to examine each part of the system in turn, from preventative actions to reporting systems, investigation and remedies, tribunals and regulators. The group is comprised of experts in employment and discrimination law, HR, men’s violence against women and women’s equality. It is currently meeting monthly, and will generate some recommendations or proposals, aimed at Scotland-based institutions, for preventing and responding to workplace sexual harassment.

Engender also commissioned a literature review by Professor Nicole Busby, Professor in Human Rights, Equality and Justice at the University of Glasgow’s School of Law. The literature review focused on anonymous reporting mechanisms for sexual harassment and will help inform our recommendations for employers about how reporting systems could work better for women. Anonymous reporting mechanisms have been introduced at a number of workplaces, universities and other institutions, and the Equality and Human Rights Commission (EHRC) recommend that employers adopt them as one option of several for victim-survivors to choose from.[5] You can find a guest blog from the EHRC about some of their recommendations here.

Finally, we are working on a survey that asks women in Scotland about their perceived barriers to reporting sexual and sexist harassment, and how employers can improve their practices to better respond to women’s needs and create healthier workplace cultures. We hope to then have some more in-depth conversations through virtual discussion groups with women who have experienced harassment and/or different parts of the reporting process (including making a formal report, going through an investigation, and/or making a claim to an employment tribunal).

All of this information gathering and analysis will enable us to produce a final report, which we expect to publish by early autumn, detailing recommendations for employers, Scottish Government, UK Government, trade unions, the Scottish Courts and Tribunal Service and other institutions. We will use these findings to advocate for a Scotland where all women can equally participate in employment and public life, free from sexist and sexual harassment and discrimination.

If you are looking for support about sexual harassment or any other form of sexual violence, you can contact the Rape Crisis Scotland helpline on 08088 01 03 02 or find out more information at rapecrisisscotland.org.uk.

Scottish Women's Rights Centre also provide free legal information, advice and representation to women affected by sexual harassment, violence and abuse. You can contact their helpline on 08088 010 789 or visit scottishwomensrightscentre.org.uk.

[1] A. Topping (2021) ‘Almost all young women in the UK have been sexually harassed, survey finds.’ The Guardian, 10 March 2021. Available at: https://www.theguardian.com/world/2021/mar/10/almost-all-young-women-in-the-uk-have-been-sexually-harassed-survey-finds.

[3] TUC (2016) Still just a bit of banter? Sexual harassment in the workplace in 2016. Available at: https://www.tuc.org.uk/sites/default/files/SexualHarassmentreport2016.pdf.