Guest blog from Anni Donaldson, the Knowledge Exchange Fellow & Project Lead at the University of Strathclyde's Equally Safe in Higher Education project. You can follow Anni, winner of the first 'The Write to End Violence Against Women Awards', on twitter. 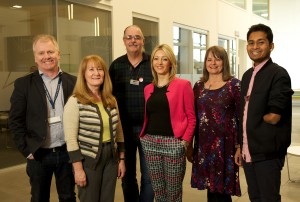 A new project to prevent sexual violence in a Scottish university has just got off the ground. The new campus-wide project at Strathclyde University will work with students, staff and their unions to prevent sexual and other forms of violence against women. The project will raise awareness across the campus of violence against women, run prevention campaigns, design new courses, ensure people affected know where to turn, provide support and collaborate with other campuses keen to do the same.

People often think that a student’s life is one big party with time for the odd sit-in between classes. Some might envy a life with nothing more to worry about than turning up occasionally and getting the next assignment in on time. For some students though, especially women, campus life isn’t all swotting and clubbing. There is growing evidence that women students are no more protected from the dangers of domestic abuse and sexual violence than women everywhere else.

The problem has been highlighted in the US lately with some high profile cases of young women being raped and sexually assaulted in so-called Fraternity Houses - those glorified, all-male, unlicensed drinking dens beloved of US campuses.

The issue also took center stage at the recent Oscars when Lady Gaga and a group of campus sexual violence survivors performed Till it happens to you from the Oscar nominated film The Hunting Ground – a powerful reminder of the impact of sexual violence on women’s lives and how it can wreck promising academic careers. But for the campaigning of the young women shown in the film, US universities would still be turning a blind eye.

A picture is beginning to emerge of the situation across the UK and Strathclyde is catching the drift. Research by the National Union of Students found sexist and homophobic chat to be pretty normal - Laura Bates, of the ‘Everyday Sexism’ campaign, calls it women-hating – pure and simple. There have been reports of nasty ‘lad culture’ on some Scottish campuses, with women considered ‘fair game’, being harassed by groups of drunken young men and subjected to insulting sexist language and threatening behaviour.

A UK national student survey also found that one in seven women had experienced physical or sexual violence on campus, two thirds reported verbal harassment, groping, flashing or unwanted sexual comments. Women students commonly reported a loss of confidence, and feeling more frightened as a consequence of being victims of violence.

One student quoted in the report recalled how “…male students have discussed other female students – and women in general – in sexual and quite aggressively negative ways. When myself or others have expressed discomfort, we have been mocked and ostracised from that social group.”

Groping girls is a growing problem highlighted recently by the Girls Against campaign - a group of teenage girls from Glasgow heartily sick of being inappropriately touched at gigs. Student union bars and clubs can be just as bad. Jane told me recently, “This guy came up behind me while I was dancing with my friends, grabbed me round the waist and lifted me up high laughing all the time … I got such a fright, he wouldn’t put me down, it was humiliating…it’s what lassies have to put up with.”

The national survey found that young guys seem frighteningly ignorant of how their behaviour affects women, one young women recalled, “When I have confronted the men they have either seemed shocked/embarrassed that I didn't like receiving this kind of attention or have found it funny that I have been unhappy.” With its sprawling city centre campus, the Strathclyde project will work closely with its own Student Association USSA to keep its popular cafes, bars and clubs fun and abuse-free places to work, relax and socialise.

One university student described being stalked and harassed. Grace’s ex-husband followed her secretly to her classroom, waited until the class was leaving and began screaming, calling her foul names while her class mates formed a protective shield around her. “I was really frightened of him. He hated me studying and I had left him. He used to hang about the campus. He wanted to get me thrown off the course”. Campus security staff kept a look out for him after that. Grace received good support from her tutor and graduated successfully.

The bravado of the campus pack mentality should not however be seen in isolation or dismissed as ‘boys being boys’. It reflects worrying national trends showing an increase in so-called ‘rape culture’ and rising incidences of sexual violence among young people. We know that stalking, harassment, sexual assault and domestic abuse are significant issues facing all Scottish women. College age women are no exception, with 1 in 4 reporting unwanted sexual behaviour during their studies; one in three rapes in Scotland are carried out by young men aged 17-25 years.

Strathclyde University has a reputation for innovation. This unique cross-campus collaboration aims to create a campus for the twenty-first century with zero tolerance of violence against women.