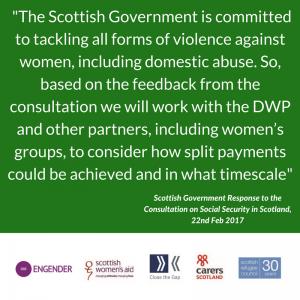 The announcement from Jeane Freeman, Minister for Social Security, came as the Scottish Government published their response to the consultation on social security in Scotland. 88% of the respondents to the Government’s consultation called for the splitting of Universal Credit payments, largely based on a desire to prevent power imbalances in relationships.

We, along with Scottish Women's Aid, Close the Gap, Carers Scotland and the Scottish Refugee Council have long been calling for the Scottish Government to use devolved powers over social security to offer individual payments of Universal Credit.

“We are delighted that the Scottish Government have listened to the calls of organisations and individuals across Scotland who recognise that offering household payments of Universal Credit as default is bad for equality.
We know that women are bearing the brunt of so-called welfare reform – both being hit hardest by cuts to social security, and having to pick up the slack where public services are being curtailed. By committing to individual payments of Universal Credit the Scottish Government is honouring their pledge to base Scotland’s social security system on dignity and respect.”

The Scottish Government document cites tackling violence against women as a key reason behind the decision to consider split payments. Marsha Scott, Chief Executive of Scottish Women’s Aid, which supported the calls for individual payments of Universal Credit, said:

“Research suggests that 89% of all women who are abused by a partner, experience financial abuse as part of domestic abuse. By deciding not to endorse UK Government policy measures such as the single household payment for Universal Credit the Scottish Government is supporting women’s financial independence and will reduce the ability of perpetrators of domestic abuse to control their partners and their children”

Engender also welcomed key announcements in the Government response, such as the commitment to human rights, the introduction of a charter, and working towards person-centred approaches to administering payments. They were disappointed, however, not to see equality appear in the preamble to the bill, with Emma Ritch saying:

“Women’s equality has been undermined by the drastic cuts to social security the UK Government has made, because women’s lived experience hasn’t even been considered as part of the ‘welfare reform’ processes. We want to see equality join human rights as one of the principles shaping our approach to social security in Scotland to ensure our systems are built to meet the needs of all of Scotland’s people.”

The Scottish Government’s Response to the Consultation can be accessed here and the specific reference to Universal Credit can be found on page 17.