Stay up to date with Engender's work in Europe

We know that Brexit is on the minds of women in Scotland at the moment. The Conservative leadership campaign that will select the next UK Prime Minister has brought a lot of fears to the surface about immigration, women’s rights, care, and the economy.

Brexit was also on the agenda of the European Women’s Lobby general assembly, which I attended along with colleagues from sister organisations in Wales, Northern Ireland, and England. Together Engender, Northern Ireland Women’s European Platform (NIWEP), Women’s Equality Network Wales, and England’s National Alliance of Women’s Organisations makes up the UK Joint Committee on Women. We are the UK representation to the Lobby, which is the largest umbrella body of feminist organisations in Europe. 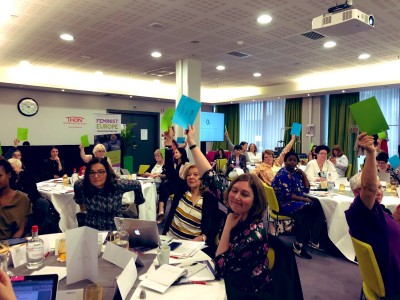 The Lobby creates a vital space for national women’s coordinations to collaborate on European-level advocacy, work on nationally-focused campaigns, and push back against the rise of populism that is undermining women’s equality and rights. The UK’s place in the Lobby post-Brexit was in question, but last year’s general assembly saw an indicative vote to keep us as members even if the UK exits the EU.

This year, after some work by Engender on the statutes sub-committee, Lobby members voted to change the organisation’s statutes to enable the UK to continue as members. It was moving to see women from across Europe with their voting cards held high in support of continued solidarity and sisterhood with the UK.

The North is Next

The Lobby’s general assembly also hears emergency motions. This year the UK Joint Committee on women wanted to highlight a persistent and continuing breach of rights for women in Northern Ireland. That part of the UK has a more punitive law on abortion than Alabama, and women can be sent to prison for life for buying abortion medicine on the internet and taking it. The General Assembly passed a motion calling on UK Government to abide by the direction of the UN’s CEDAW Committee and act to change the law while Northern Ireland has no government. Last week saw some much-needed movement on this, as amendments were passed in the UK House of Commons that would give UK Government a mandate to act if the power-sharing executive at Stormont is not in evidence by the end of October this year.

The UK’s motion was seconded by the German national co-ordination, the Deutscher Frauenrat, and passed with an overwhelming majority. The European Women’s Lobby now has a mandate to track progress on the amendments and push the UK Government to act.

At Engender, we're really proud of the work we do with the rest of the UK, and with Europe. Working across borders on shared struggles is a brilliant way to make change, and we don't often talk about our work outwith Scotland. We want to be able to keep anyone who's interested in feminism across the four-nations of the UK and throughout Europe up to date, and the members of the UK Joint Committee on Women have committed to increasing the ways that women and women’s organisations in the UK can learn about what’s going on. To do this, we've created a mailing list for the UKJCW specifically. The list will send out two emails a year, giving you highlights from the work of our sister organisations in the UK, and updates on the work of the European Women's Lobby. This is just a trial, and if you have any thoughts on what else we should be doing to promote our international work, please let us know!