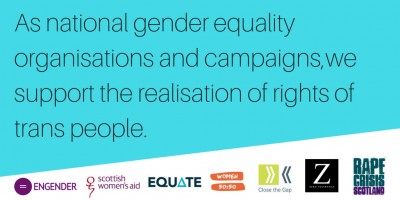 For over a decade, we have engaged in constructive dialogue with our colleagues in the Scottish Trans Alliance, Equality Network, LGBT Youth Scotland and Stonewall Scotland. We have shared knowledge, explored complex practicalities and developed sensible policy positions on trans inclusion. We do not regard trans equality and women’s equality to contradict or be in competition with each other. We listen carefully to each other’s ideas and concerns and collaboratively create solutions, including the maintenance of women only spaces and services. Rape Crisis and Women’s Aid in Scotland provide trans inclusive services on the basis of self-identification.

We support the Equal Recognition campaign and welcome the reform of the Gender Recognition Act. The complexity, restrictions and expense of the current gender recognition process particularly discriminates against trans people who are disabled, migrant, minority ethnic, unemployed, homeless, fleeing domestic abuse, young or non-binary. Enabling trans people to smoothly change their birth certificates at the same time as they change their other identity documents is a much needed positive step forward for society.

We will continue to work collaboratively with Scottish Trans Alliance and other equality organisations with the aim of ensuring that new processes are appropriately designed and without unintended consequences. Areas for discussion as the reforms proceed are the collection and use of gender disaggregated data and the approach to sex offenders within the prison estate.