Smash the Patriarchy, Save the Planet 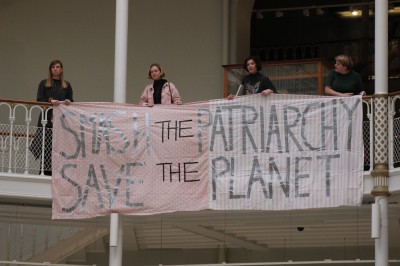 As people around the world prepare to go on #ClimateStrike tomorrow, Engender's Communications and Engagement Manager, Alys Mumford, writes about why feminists should take action on climate change.

Climate change is a feminist issue. Just as we strive to include intersectional analysis in all of our work for women’s equality, we must recognise that climate change is an issue which disproportionately affects women around the world. Within this, as with so many issues of women’s inequality, it is poorer women, women of colour, carers, disabled women, and other marginalised women who are easier to ignore by decision-makers, and who will bear the brunt of the extreme weather, conflict, forced migration, increased illness, and resource shortages.

The climate crisis is one which has patriarchy at its heart – from the poor decision-making and intransigence of male-dominated governments and companies, to the failure of many environmental movements to centre anti-racism as a key part of their manifestos for change. It is also a crisis which is doomed to continue unless the voices of women, young people and other underrepresented groups are finally listened to. As the brilliant ‘Mothers of Invention’ podcast tells us: climate change is a man-made problem with a feminist solution.

Find out more about the climate strike here: https://climatestrike.scot/