Should CEDAW be incorporated into Scots Law? 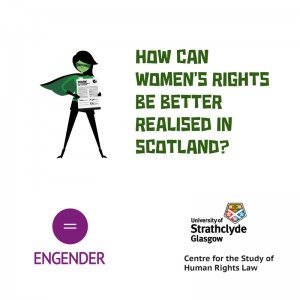 Today Engender launched a paper, written by Professor Nicole Busby and Professor Muriel Robison discussing whether incorporating CEDAW into Scots Law would result in better realisation of rights for women in Scotland. It explores what impact incorportion would have on women's equality, sets out how incorporation could happen, and discusses other legal mechanisms which might be needed for women's rights to be fully realised in Scotland

The paper was launched at an event in collaboration with the Centre for the Study of Human Rights Law at Strathclyde University.

"We're delighted to launch this paper which shows that CEDAW, the UN bill of rights for women, should be incorporated into Scots Law; ensuring the maximum protection and promotion of women's rights we can. For 25 years Engender has been working for women's equality, and throughout this work it is clear that women's rights are not some abstract concept, but integral to all aspects of women's daily lived. The rights which are meant to be protected under CEDAW are being violated every day, and now is the time to ensure that we take every measure we can for women's equality."

Professor Nicole Busby, co-author of the paper and Professor of Law at Strathclyde University said:

"CEDAW can and should be incorporated into Scots Law, where it has the potential to be transformative in the journey towards women's equality. This has never been more important as now under the looming shadow of Brexit. In contrast with other levers for equality, CEDAW recognises that women have been systemically discriminated against in law and in society, and calls for substantive equality between genders."

Also speaking at the event were Judith Robertson, Chair of the Scottish Human Rights Commission, who said:

and Professor Alan Miller, Chair of the First Minister's Advisory Group on Human Rights Leadership, who welcomed the paper, saying:

"I utterly embrace the paper and it represents a rich contribution to where we are in Scotland today, We are in a time of great fluidity, and we need to be sure that, whatever constitutional changes we face, we have created an enviroment where women's rights can be realised."