Sexism in advertising, what can we do?

Caroline, Engender's recently recruited Membership Engagement Assistant, explores the effects of sexism in advertising and looks at how we can challenge gender inequality within the media.

I like to think it is now no secret that marketing communications shape the way in which women view themselves and the way that society views women. Advertising agencies (and the media) dictate our perceptions of beauty; creating unobtainable standards and enabling the fashion and beauty industry to capitalise on our insecurities. Is there anything we can do to stop these damaging portrayals of women?

We may have appeared to have progressed from the stereotype of ‘the good wife’ basking in her domestic glory, but in reality it seems there has merely been a shift from overt 1950’s sexism around gender roles, towards more subtle gendered advertising juxtaposed with the blatant sexual objectification of women. We are constantly, and often subconsciously, absorbing imagery of hyper sexualised women or sometimes even just female body parts used as display cases for products (not wanting to name any names, Tom Ford). This is grooming us from a young age to believe that as women our main or only asset is our sexuality, therefore we are only worth what are bodies are perceived as. This message is historical and pervasive.

In the 50s, 60s and 70s advertisements depicting the subservient housewife, catering to her husbands every need, were rife. Below, is an image of a man quite clearly about to, or threatening to, punish his wife in the name of unfiltered coffee. Although presenting itself as tongue in cheek it is quite obvious, in 2016, images like this normalised and perpetuated gender based violence. 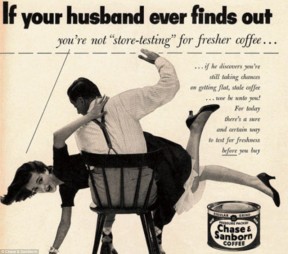 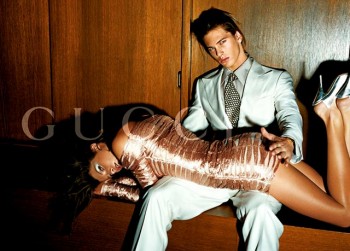 In the adjacent image, the woman adopts a similar pose although more sexualised, with less flailing limbs.This is imagery we see time and time again within the fashion industry; sexualised females in submissive poses, strategically placed on or next to a man or group of men. This reinforces the damaging idea that women are merely objects or props for the sole purpose of male gratification. Seeing women being portrayed in this way teaches us that we must endeavor to look beautiful and sexy in order to compete with each other for male attention. Advertising agencies pit women against each other instead of celebrating their quirks and curiosities, lumps and bumps - those things that make us beautiful and unique.

Too often we see only a certain kind of women in the media, usually white and a size 6, either sexualised or maternal. But as we know women are anything but one-dimensional; we are beautifully complex. We come in all shapes and sizes, with individual personalities and talents. We are not seeing a variety of women being represented. We are not seeing ourselves in films, music videos and advertising, and the inability to relate to the majority of women in media is making a lot of us feel insecure.

It’s not all doom and gloom in the world of advertising though, as it appears to have become increasingly more popular for companies to adopt marketing strategies that challenge gender stereotypes and empower women. This makes for a refreshing change from the usual capitalization of our uncertainties. I for one will welcome these adverts with open arms as they enable us to take steps towards a more realistic and positive representation of women in advertising, and they are far superior to the alternative!

Sport England’s national campaign This Girl Can, is my favorite example of empowering advertising. The campaigns concept was born from a national survey that showed that 75% of women wanted to become more active, but body image was identified as one of the barriers to engaging in physical activity. This ground-breaking campaign directly counteracts the results of the survey by celebrating active women regardless of their sporting ability, size and appearance. Creative and inspiring advertising works; independent research says 2.8 million women aged 14 to 40 who recognise 'This Girl Can' say they have done some or more activity as a result. The campaign has been talked about on social media every single day since it launched, over a year, with the hashtag #ThisGirlCan featuring in over 660,000 tweets. 540,000 women and girls have joined the This Girl Can social media community. There is a reason that marketing communications such as this go viral. There is a reason they work - we deserve to feel good about ourselves, and seeing ourselves represented in advertising gives us confidence.

So we know that positive advertising creates positive effects, but what can we do about the adverts out there that are damaging women’s self esteem and sending the message to men that the objectification of women is a standard practice?

Last month, Engender met with a representative from the Advertising Standards Authority (ASA); the UK’s independent regulator for advertising across all media. Up until this point, I had mentally constructed several angry worded letters to organisations regarding the way in which their advertisements portray women, but done nothing more. Now, like a dream come true, I was being told that I can officially complain about an advert and by law each complaint needs to be considered. What wonderful news, organisations can be held accountable for their sexist or misleading adverts! But wait, there is criteria (which you can read in depth here.)

The most recent example of an advert banned by the ASA comes from Gucci."The complainant, who believed the featured models appeared unhealthily thin, challenged whether the ad was irresponsible." While there will always likely be debate on what is considered an unhealthy weight, it is important to challenge any visual language that does not resonate with us, whether this by lodging a formal complaint or by ranting on social media.

CAP (The Committees of Advertising Practice) guidelines sate that “particular care must be taken to avoid causing offence on the grounds of race, religion, gender, sexual orientation, disability or age.” While marketers are urged to consider ‘public sensitivities’ before deploying potentially offensive material, an advert that may be considered offensive to some people may not necessarily mean there are grounds for finding it in breach of the code. In other words an advert must be considered to cause widespread distress, or present as misleading in what the product offers, before it can be banned.The code states that “All marketing communications should be prepared with a sense of responsibility to consumers and society,” they should, but quite often aren’t, so let’s challenge the damaging ones. The ones that tell us that emaciated is healthy, that teenagers should be sexualised, and that women’s only value is their bodies.

The reality is that we will not get every advert that objectifies women banned through the ASA. Visual suggestions of gender based violence can be subtle and may not breach CAP codes. But we do not need to be silent in our objections. Get that mentally constructed, angry worded letter on to social media and shared all the way around the world! We need to get vocal about an industry that only values youth and beauty, we need to urge organisations to represent the unrepresented. Let’s strive to make seeing all women – disabled women, older women, women of every shape, size, race, religion, age, hair colour, sexual orientation, profession and temperament - commonplace within media. Let’s empower each other while we work towards this, because I believe we should all live in a world where intelligence, confidence and imperfections are considered sexy. Advertising is a small yet significant fragment of the media. We have the right and the ability to challenge sexist advertising and put an end to the perpetuation of damaging gender stereotypes. If you see it, call it out!