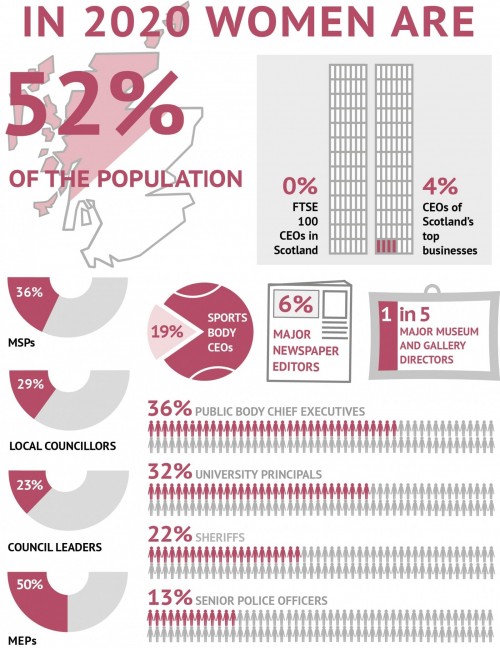 Women make up 52% of the Scottish population and should be equally represented across the spectrum of civic life. Yet, gender parity in public spheres is far from becoming reality. Of the 39 different spheres we researched, only 5 had achieved 50% women, and only 1 of these (the Scottish Government Strategic Board) exceeded it, with 11 women and 9 men.

Since ‘Sex and Power 2017’ was released, there has been progress in several spheres, including:

Caution must be taken with these figures though – despite showing increased women’s representation, in most of these spheres, men still remain the dominant force. Certain sectors have shown little or no progress towards increasing their gender balance since 2017.

The following spheres still have under 20% women:

These figures show us that not enough change is happening, and not quickly enough, to redress the gender imbalance in Scotland’s corridors of power. In most cases, the numbers of women have increased only very slightly, usually representing the difference of one or two changes in personnel, rather than a stepchange in employment practices, organisational culture, or commitment to diversity.

“Campaigning for equality can sometimes feel like wading through treacle. Gains in one area can be counteracted by regression in others, or just the continuation of the status quo. Sex and Power 2020 shows that positions of power in Scotland are still overwhelmingly dominated by men – controlling decisions over legislation, convictions, the media we consume and the healthcare we receive. Three years has seen just 4% change in the overall representation of women in top positions, and several sectors such as the judiciary actually move backwards.

But there is cause to be hopeful. In politics where consistent pressure has been applied from groups like Women 5050, the Coalition for Racial Equality and Rights, and the Equality Network, we have seen a change. Scotland has equal representation in our MEPs, in our Cabinet, and in local authority chief executives. This demonstrates that persistence in calling for change, along with feminist leadership, can see improvements in women’s representation.

Much more needs to be done to ensure we see 50% of positions of power in Scotland held by women, and that these women represent the true diversity of Scotland. We want to see our democratic bodies, courtrooms, business boards and art galleries filled with women of colour, disabled women, lesbian and bisexual women, trans women, and all other women who are so often ignored.”