One last chance to scrap the rape clause 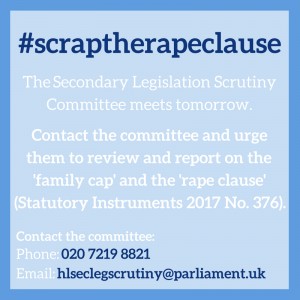 Last week, the UK government introduced a law that will limit social security payments to the first two children in a family. In short, the UK government introduced a ‘family cap’, telling families who rely on social security for their well-being that help will only be provided if you have a maximum of two children. The draft law, however, has an exemption. A ‘family cap’ will not apply to your family if a third or subsequent child is the result of rape. Known as the ‘rape clause’, this new policy will force a woman to disclose that she is the victim of rape at a time and in a context not of her own choosing.

Engender, and other women’s organisations in Scotland, have been calling on the UK government to repeal both the ‘family cap’ and the ‘rape clause’. The policy violates international human rights, will re-victimise and re-traumatise women, and will exacerbate women and children’s poverty. Leading the campaign in Westminster has been Alison Thewliss MP, who has raised the ‘rape clause’ in the House of Commons a total of 25 times. Today, Ms. Thewliss is calling for an emergency debate in Parliament on the ‘rape clause’, as the draft law was passed without debate or scrutiny.

When a public policy is so blatantly cruel, it's difficult to put yourself in the shoes of those who directed its development, much less those who pushed it through Parliament without debate. Setting aside that the lack of scrutiny flew in the face of our democratic process, there is one last hope. Tomorrow the Secondary Legislation Scrutiny Committee of the House of Lords will review the policy. Although its title is a mouthful, the Committee is important because it has the power to both criticise the draft law and invite the House of Commons to question it. We’re calling on the Committee to exercise its powers today.

We refuse to accept that we’ve become a society so morally bankrupt that we’re willing to dictate the size of UK families and punish a woman who is the victim or rape. If, like us, you are outraged by the ‘family cap’ and ‘rape clause’, we urge you to contact the Committee today. Their contact details are below, and all you need to do is ask them to review and report on the ‘family cap’ and the ‘rape clause’ (Statutory instruments 2017 No 376). Of course, you can also add your own reasons why you think they need to examine this policy. You can read our full letter to the committee here.