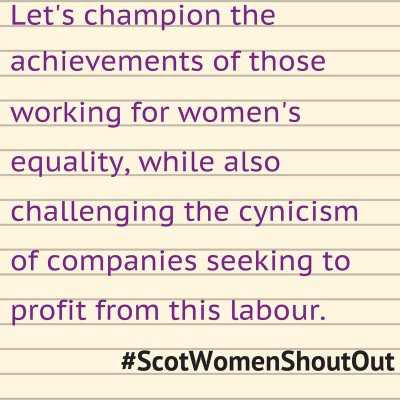 Women’s campaign groups, equalities organisations, and individual gender advocates in Scotland do amazing things, often with very limited resources, and little attention. We are planning to highlight some of the people and groups making women’s equality happen, to celebrate their work and inspire others to take action. We’ll be doing this on Monday using the hashtag

One of the reasons we are doing this is because we have seen a surge in awards events and ceremonies that are more focused on turning profit than championing the hard work of the equalities sector in Scotland (you can read one example of that here - 'Creative Oceanic', the company mentioned in this article, are also running the Scottish Women's Awards). Often these awards will claim that nominations come from the public, but we have yet to see evidence of this on their social media channels, and they often give no information on how categories are decided or judged. To attend the "glamorous" awards ceremony, dedicated women's and equalities campaigners are asked to pay upwards of £100 per seat - illustrating just how little they understand about a sector in need of significant funding (nominees are given one complimentary ticket).
While we don’t doubt that all of the women and women’s organisations nominated absolutely deserve to have their work recognised, this is clearly an attempt to profit from women’s labour and activism, without offering anything of substance in return. And of course many awards ceremonies do charge for attendance. But ethical awards are led by people from the communities they commend, prioritise genuine public engagement in nominations, offer valuable media engagement opportunities to winners, and generally tend to know something about the sector they are celebrating (one such example is the Outstanding Women awards run by the Glasgow Women's Library and the Saltire Society - accepting nominations now!).

So of course let's celebrate the women who are nominated in these awards ceremonies, but also let’s show the wider picture. Let's champion the achievements of those working for women's equality, while also challenging the cynicism of companies seeking to profit from this labour. From Monday August 13th, join us in using the hashtag #ScotWomenShoutOut to tell us who you want to celebrate as a champion for the women of Scotland!
Posted on August 8 2018 at 21:00

Marking 10 years since the Christie Commission A decade ago saw the report from the Christie Committee, a ground-breaking inquiry which aimed to usher in a new era in public sector delivery in Scotland. To mark 10 years since the release of the report, our Executive Director Emma Ritch joined sector leaders in a special edition of Third Force News magazine to reflect on the Commission and progress made on its recommendations.