Scottish women and the vote 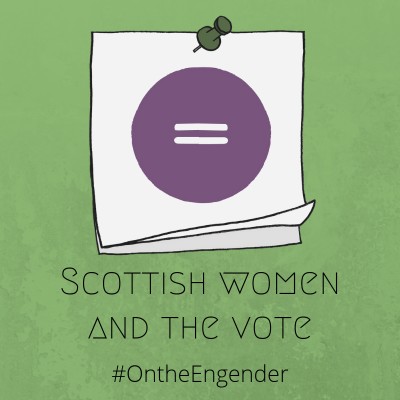 In this blog, Alys Mumford reflects on our podcast miniseries looking at Scottish Women and the Vote.

As with all things relating to the struggle for women’s liberation, the recording of a podcast series about women's suffrage has been in equal parts inspiring and disheartening.

We've celebrated the representation of the people act, while at the same time recognising the barriers which still exist for so many women in Scotland today. We've applauded the activities of women foiling the attempts of the 1911 census collectors (having an all-night party in a café with buns, games and fancy dress – I’m in), while at the same time witnessing arguments online about trans and non-binary inclusion in 2021.

Before we started recording the series, I was a bit nervous about focusing on voting. At election time, it’s common to see variations on ‘women fought for your vote so you have to use it’ coming up against ‘I don’t have to vote if I don’t want to’. Many people have very legitimate reasons for not voting, and I was conscious that we didn’t want to make a series that painted voting as a solution to all of society’s issues.

So for me, I think one of the things which has struck me most about the process of recording this podcast was about how much discussions about the vote aren’t just about the process of slipping your ballot paper into the box. In Volume 4 Eilidh Dickson makes it clear that Governments must provide education and opportunities for engagement with democratic processes, as well as the actual means of casting your vote, in order to fulfil their human rights obligations.

Denying people the right to vote blocks them from the simplest way of engaging in democratic processes, of making their voice heard, of calling for change. If voting can be seen as a civic responsibility (and we often see discourse condemning people who don’t vote as ignoring the suffrage struggle, or claiming ‘if you don’t vote you can’t complain’), what are we telling people by denying them the right to vote? That their views don’t matter, that they are not part of our society, that they are voiceless.

When I was chatting to the Refugee Women’s Strategy Group, Mhurai Dzingisai repeatedly made the point that the right to work was a more vital issue than the right to vote. This, too, had echoes of the battle for women’s suffrage a hundred years ago, as we learnt from Esther Breitenbach back in Volume 1, where tactics, priorities and messaging were fiercely debated. Voting can seem like a a trivial thing to campaign for when we see so many wrongs in the world, and politics appears so far removed from our lives.

Campaigning can often be incredibly disheartening, and I often find myself in conversations with people wistfully thinking about what it would be like to have been involved in the suffrage campaign, the civil rights movement, the first pride march. These campaigns seemed so clear-cut, so obviously the right course of action, so inevitable. But of course they didn’t seem that way at the time. There were all the same concerns and disagreements, uncertainty and fear that you might be doing the wrong thing, that there were bigger issues out there, or that you would face violence for your stance. And of course all of these liberation struggles still continue, with the right to vote still playing a part.

I love looking back at anti-suffrage posters. To see the laughable arguments made about women’s intelligence, motives, and suitability to make decisions about their country. But it’s sobering to think that, while the language and imagery may have changed, who can vote is still decided by outdated views of what makes someone a citizen, failure to listen to young people wanting to make their voices heard, and an inability to modernise a system to work for all people.

We really enjoyed exploring these issues as we chatted to people to make this podcast, and I hope you enjoy listening to it as well. Huge thanks to everyone who appears on the podcast, and to our fabulous producer Amanda Stanley for putting it all together.

Listen to all the episodes in our Centenary Grant funded miniseries on Scottish women and the vote below, and find more episodes of the On the Engender podcast here.