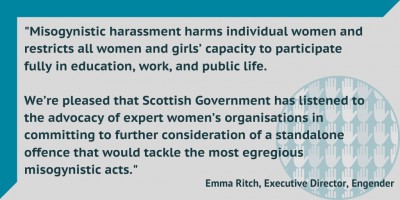 The Scottish Government have today published the Hate Crime and Public Order (Scotland) Bill, and announced the creation of a working group to consider how the law should deal specifically with misogyny, as called for in Engender's report "Making Women Safer in Scotland: the case for a standalone misogyny offence". This report made the case for misogyny to be considered as a criminal offence in Scotland in order to challenge the epidemic of harassment and abuse facing women and girls. Critically, the new Bill does not include a 'gender aggravation', which Lord Bracadale proposed following his independent review of hate crime, and which Engender and other national women's organisations opposed.

Our report showed that simply adding gender or sex to the list of characteristics already covered by hate crime legislation will not solve the problem of misogyny, and may in fact undermine existing policy designed to tackle domestic abuse and other forms of violence against women. Instead, we recommended a participatory process which would take into account the reality of women’s lives in Scotland, and draw on international expertise.

“Misogynistic harassment harms individual women and restricts all women and girls’ capacity to participate fully in education, work, and public life. We’re pleased that Scottish Government has listened to the advocacy of expert women’s organisations in committing to further consideration of a standalone offence that would tackle the most egregious misogynistic acts.

We know from international examples where this has been tried, that simply adding gender to a list of hate crime aggravations has only resulted in a handful of investigations and prosecutions of crimes targeted at women. This is not enough to curtail the harmful misogynistic harassment women and girls face in schools, workplaces, online, and in public space – we need a new approach, and look forward to taking part in developing a response that will make girls and women in Scotland safer.”

Read our report here, and Scottish Government's announcement of the Hate Crime and Public Order (Scotland) Bill here. All of the Bill materials are available at the Scottish Parliament's website.