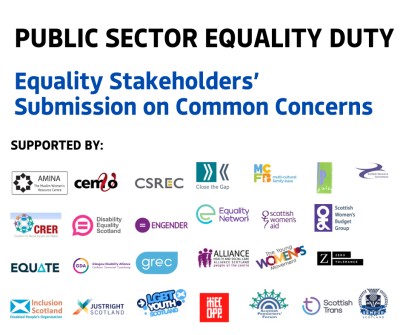 The Scottish specific duties of the Public Sector Equality Duty, which is meant to ensure that all public bodies take action to proactively advance equality and eliminate discrimination, has been under review for several years. In the joint submission, we state that our concerns about the failures of the existing system are not reflected in the current consultation, despite many of us repeatedly raising these with Scottish Government.

The proposals are “light-touch” and “will be insufficient to drive the change that is required”. As such, the organisations – many of whom undertake targeted work to support and challenge public sector bodies to fulfil this duty – do not believe that the reforms will go far enough to lead to real improvements in the lives of people who share protected characteristics.

The Coalition for Racial Equality and Rights, one of the organisation who led on the joint submission regularly publishes research on the performance of the Public Sector Equality Duties. In 2021 they undertook research, showing that many are organisations are still struggling to meet their legal obligations under PSED, and there are areas where there has been little improvement, or even a decline over the eight years since the first round of reporting.

Lindsey Millen from Close the Gap, Scotland’s expert organisation on women in the labour market, said:

“The public sector equality duty has failed to realise the transformational change that was envisaged when it was introduced a decade ago. There’s been no meaningful change for women workers, with persistent gender pay gaps, unequal pay, and stark job segregation remaining key features of the public sector. We need substantive reform that levers action from public bodies on the inequalities women face. Women public sector workers have been essential to pandemic response, while at the same time Covid-19 risks worsening women’s inequality at work. This is a pivotal moment, and Scottish Government needs to be bold and deliver a public sector equality that will realise equality for women working in the public sector.”

“For too long, disabled people in Scotland have been failed by the mechanisms that are meant to prevent discrimination and uphold equality. Now, after a decade of austerity and two years of living in a pandemic which has supercharged existing inequalities, resulting in disproportionate impacted on disabled people, we need urgent action. Whilst we welcome the Scottish Government’s intention to reform the Scottish Specific Public Sector Equality Duties, unfortunately, these proposals fall far short of what is actually needed to make public sector organisations end their disability pay gaps, tackle discrimination, and uphold our rights. We must move beyond reporting within bureaucratic constraints to co-designing and co-producing meaningful actions which are measurable and which make a difference in the lives of those with protected characteristics.”

“The Scottish Government claim to be committed to mainstreaming women’s equality, but the lack of ambition in these reforms is really worrying. We have been waiting for this review for years, and it needs to be far more comprehensive to bring about real changes for women in Scotland. We’re proud to be working with other equalities organisations to call for stronger commitment to equality and more robust changes to the Public Sector Equality Duty.”

Jen Ang from JustRight Scotland, a charity that uses to the law to achieve social justice, with the aim of reducing discrimination and disadvantage across Scotland, said:

“The Public Sector Equality Duty is one essential tool to make sure that rights are upheld for everyone in Scotland. The reform of the Scottish Specific duties needs to be based on a human rights approach and prioritise effective means of creating change in the lives of people with protected characteristics - rather than simply making compliance simpler and marginally more effective.”

The submission, whose signatories include regional equality councils, anti-poverty organisations, race equality charities, and groups working to end violence against women, calls for a “fully-fledged collaborative process” with experts in equality and urges the Scottish Government not to miss the opportunity to make robust changes to improve the lives of marginalized people.