Scotland's Programme for Government - what's in it for women?

In the past week there’s been a slight autumn chill in the air in the mornings, and a pleasing back-to-school vibe in genderland that speaks of newly sharpened pencils and fresh notebooks.

Autumn is a season of new beginnings, as well as mellow fruitfulness, and the last few days has seen the launch of Scotland’s Programme for Government as well as Engender’s own Gender Matters Roadmap.

The Programme for Government is Scotland’s version of the UK Parliament Queen’s Speech, minus the folderol and gilt. It lays out the legislative and policy priorities for the next year, providing a fairly comprehensive look at much of the proactive stuff that will be preoccupying parliamentarians and civil servants.

So what’s in it for women? 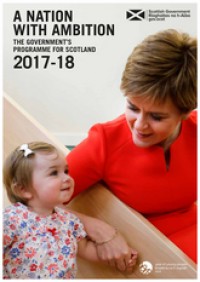 Programmes for government necessarily include a rehash of all of the pieces of legislation that have been introduced but not passed into law, and this one is no exception. There are three significant bills moving through the Scottish Parliament in this session: a bill criminalising coercive control, the social security bill, and a bill introducing gender balancing measures on public boards.

With increasing attention being paid to the toxic experience of sexual harassment, discrimination and sexualised bullying for girls at school, we also await the new education bill with interest.

Programmes for government also include policy programmes and initiatives, and the most eye-catching is the summary commitment to “provid[e] access to sanitary products for students in schools, colleges and universities to fight ‘period poverty’.” This seems to extend Scottish Government’s commitment beyond the pilots that they had previous announced, with details to follow.

In addition, the Government restates its commitment to finalising a delivery plan for Equally Safe, the violence against women strategy, and announcing the membership of the Advisory Council on Women and Girls. An additional advisory group on women and sport is also confirmed, to support the previously announced £300,000 Sporting Equality Fund, and there’s a mention for the ongoing Women in Agriculture taskforce.

The Government also commits to ensure access to abortion healthcare for women from Northern Ireland.

What do we need to make gender part of?

Of course, Engender is not only interested in the bills and programmes that explicitly reference women, but those that affect women and men in different ways. 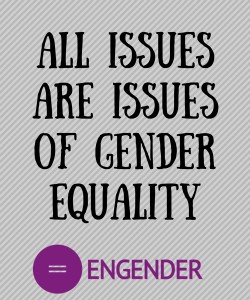 Our recent evidence to the Economy, Jobs, and Fair Work Committee pointed out the ways that economic development isn’t working for women, so we’ll be keeping an eye on new commitments to establish a Scottish National Investment Bank and new governance arrangements for economic development agencies. We want to see women-owned businesses enabled, and sectors dominated by women benefit from public sector support.

basic income, so we want to involve ourselves as Scottish Government endeavours to explore CBI.

The Programme for Government commits to lift the public sector pay cap, which will benefit the many low-paid women working in the public sector, as well as providing free personal care to those under 65. As women make up the majority of carers – paid and unpaid – the design of this policy is sure to have profound gendered impacts. This is also true for the promised expansion of childcare.

We will also be keeping an eye on the ‘comprehensive audit on the most effective and practical way to further embed the principles of the UN convention on the Rights of the Child’, both because of its impact on girls and also with a view to incorporation of CEDAW, the women’s bill of rights.

All of the domains in the Programme for Government are gendered, but our new roadmap speaks to the need to gender policy areas that haven’t been consistently within Engender’s scope, including transport (expansion of walking and cycling, public sector bid for the Scotrail franchise), planning (a new Planning Bill to ‘streamline planning’ ), the environment (phasing out petrol and diesel cars, and investing in low carbon energy infrastructure solutions), and criminal justice system (presumption against short sentences extended to 12 months, a new Management of Offenders Bill extending electronic monitoring).

We'll be working hard to make sure that women's equality is recognised in all these areas and, of course, keeping you up to date on progress.