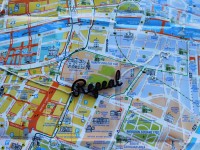 At the start of the month, I was lucky enough to travel to Ireland with several other women from Scotland to lend a hand with the campaign to Repeal the 8th amendment and allow women to access abortion in Ireland.

It was an amazing weekend and the campaign feels so positive – on our first day we joined 175 volunteers delivering leaflets across Dublin. With one week to go until the referendum, I’ve written a few thoughts about my time there. 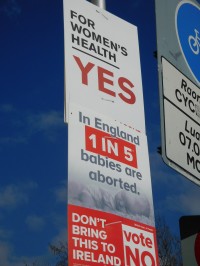 There really are posters everywhere you look (see below for a selection). It’s not unusual to see a lamppost with 4 or more huge placards on it, seemingly having an argument with itself – YES, NO, YES, NO. We were told that the Repeal campaign had already put up as many posters by the start of May than they had during the entire equal marriage referendum because they keep getting taken down or defaced.

It seems bizarre to think that this fundamental issue of women’s rights might be won or lost based on posters (particularly as in much of Scotland lamppost posters are no longer allowed – how would the referendum pan out on Scottish streets?), and equally as bizarre to see these posters juxtaposed with the countless stag parties roaming the streets of Dublin.

Most of the pro-choice posters focused on compassion, care, and health. This might seem slightly tame to campaigners used to talking about choice, rights, and women’s liberation. But it is indicative of where the conversation is at the moment.

And while we may say ‘we don’t need compassion, we just need our rights’, in Ireland, access to abortion is very literally a matter of women’s rights, and women’s deaths. So if calling for compassion means women can have (some) control over their bodies, call away.

Of course, the anti-choice lobby also like to use the language of compassion, claiming to ‘Love Both’. They have also, somehow, managed to corner the ‘anti-establishment’ corner of the campaign market. Their posters advertise their contact details under “Join the rebellion” - somewhat odd for a campaign fighting to retain legislation from 1983, and supported by major establishments in Ireland.

The comparison with England you find on many posters is also very telling. Posters talk about not wanting to bring the ‘awful’ situation that happens in England to Ireland, willfully ignoring the fact that England cares for Irish women’s health needs far better than Ireland currently does.

...but pictures speak a thousand words 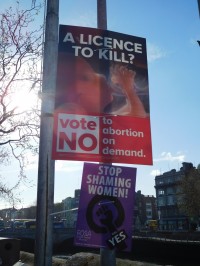 Without even touching on the horrific and graphic posters being displayed by protesters at Irish maternity hospitals - which even the anti-choice campaign requested be removed - the images on the posters we saw were offensive and disingenuous. A quick google tells me that the meter-long image here with the words ‘A Licence to Kill’ emblazoned on it is of a 4-5inch fetus at 16 weeks gestation (the repeal the 8th campaign would allow for abortions up to 12 weeks). And the newborn baby on the poster above clearly isn’t what we’re talking about when we say abortions.

The presence (or not) of women in these posters is also very interesting, with lots of headless women on display (we are just vessels, after all). It is obviously incredibly difficult to capture the great diversity of women, nonbinary people and trans men who need to access abortions in Ireland (there is a great piece on this here) so it’s little surprise that the pro-choice campaign largely stuck to words, with the exception of the Sinn Féin who featured their leader, and the Green party whose posters feature women from across Ireland who volunteered to be pictured. 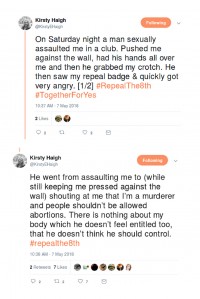 I think the most striking thing from the trip was how far conversations still need to come. About abortion, yes, but also contraception, sex education, and women’s autonomy. This is hardly surprising – divorce was only legalised in Ireland in 1996 and there was a ban on selling or importing contraceptives until 1978.

We had some truly shocking conversations, with the experience of one of our group being sexually assaulted while out, then harassed by her attacker for her pro-choice badge, painfully illustrating the ownership still felt by men over women’s bodies.

One man I spoke to was vehemently against abortion outwith cases of rape or fatal fetal abnormality, citing the existence of contraceptives as a reason abortion shouldn’t be necessary. Without even going into arguments about a woman’s right to choose, my simple explanation that sometimes contraceptives fail was clearly a concept he had never come across, and led to him rethinking his views. Positive for the campaign, but a depressing reminder of how little most men need to consider reproductive rights and health.

The power of solidarity 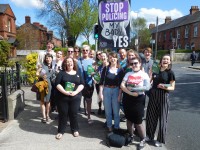 I was nervous about going to Ireland. I was worried that we would be seen as interlopers, getting involved in a campaign which didn’t involve us, but the response was amazing. Both from campaigners in Ireland who were so grateful we’d spent the time to come, and from Irish women I’ve since met in Scotland.

We also heard some really great things about the allyship shown by men in the campaign. Taking on the administration of social media pages so women weren’t confronted with abuse, putting in hours of legwork delivering leaflets, contributing to discussions but leaving platforms for women. Abortion is an issue which affects everyone, and we all must fight for a women's right to choose everywhere, not just at home.

Can’t make it to Ireland to campaign yourself? Here’s some other things you can do!